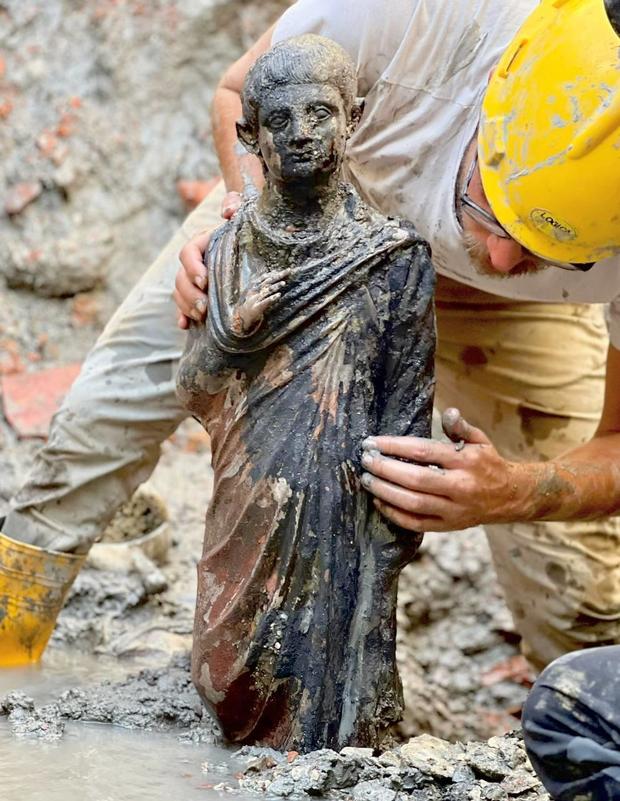 The discovery was made when experts examined the sacred basin at San Casciano dei Bagni near Siena as part of an excavation campaign in the area and learned more about Etruscan-Roman history.

The excavations, which began in 2019, ended with the discovery of the largest deposit of bronze statues from the Etruscan and Roman eras ever discovered in Italy. It was a significant find as until now this era was known mainly for terracotta statues rather than bronze, authorities said

“It’s a discovery that will change history,” said Jacopo Tabolli, a professor at the University for Foreigners in Siena who helped organize the excavation.

The statues were mostly in perfect condition thanks to the mud and hot spring water that surrounded them when they were found, explains the press release. As a result, details such as facial features, locks of hair, wrinkled clothes, and engraved inscriptions with the names of powerful Etruscan families were clearly visible in the various works.

The find highlights the transition from the Etruscan rule to the Roman Empire which took place between the 2nd and 1st centuries BC While the end of the Etruscan civilization and the beginning of the Roman rule was a period of great instability and conflict, the statues indicate that people from both sides of the struggle prayed together at the thermal spring where recent discoveries have been made, reports the Associated Press.

“While there were social and civil wars outside the sanctuary… inside the sanctuary, the great elite Etruscan and Roman families prayed together in the context of a peace surrounded by conflict,” said Tabolli. “This opportunity to rewrite the relationship and dialectic between the Etruscans and the Romans is a unique opportunity.”

Many statues depict deities, while others depict various body parts and organs that were likely used as sacrifices to the gods for healing, the ministry said in its announcement. At this time, the Etruscans dedicated their statues to the holy water of hot springs.

The local government plans to put the new discoveries in a 16th-century building in the area that will be used as a museum, the ministry said.

The discovery of these bronze statues takes place 50 years after the discovery in Calabria of the famous “Riace bronzes” of the 5th century. These pieces, which represent life-size detailed Greek warriors, became one of the greatest and most important discoveries in Italy until the last discovery at San Casciano dei Bagni.