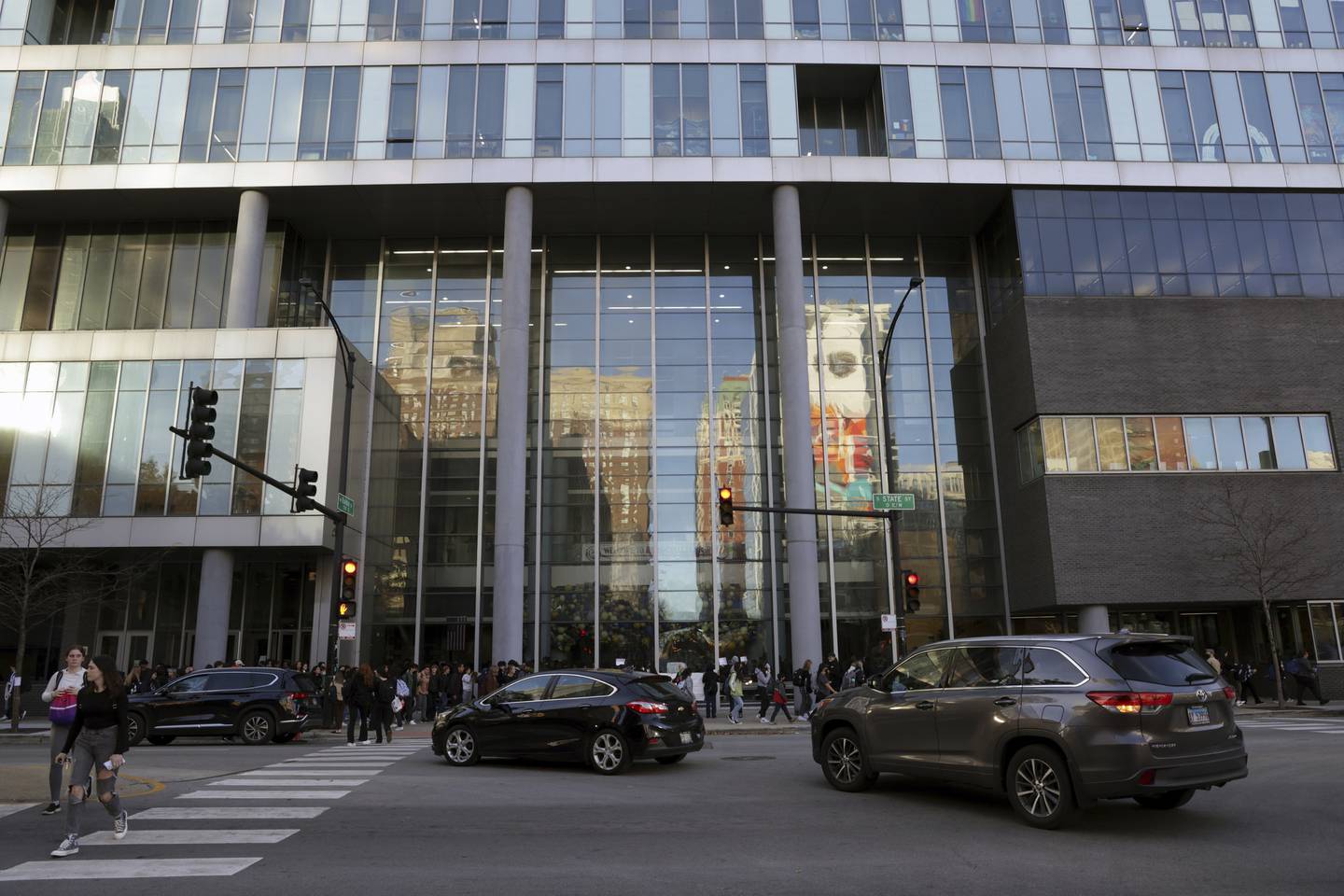 Jones College Prep students rallied Monday after controversy over a student who attended school in German military outfit on Halloween and made gestures perceived as anti-Semitic. The school’s failure to respond to the incident sparked a protest in which students called for a change in school culture, arguing that the administration had failed to deal with the long-standing problems of discrimination.

Students filled the school hall and many others watched from the second floor. Several students were holding signs towards windows overlooking the street, some of which read “You can’t hide the truth” and “Can you hear us now?”

Controversy on Friday led Chicago public schools to remove Principal Joseph Powers from “core duties, effective immediately, pending the results” of an investigation into his response to the student. In an email to his parents, Powers seemed to downplay the gestures, saying, “Surely it looks like it wasn’t the intention of the Halloween costume.”

In the CPS e-mail announcing the removal of Powers, district general manager Pedro Martinez announced that Arthur Slater, a former CPS chief “with extensive ward experience, would be the administrator.” with immediate effect.”

The issue gained popularity on social media last week after students shared posts denouncing Powers’ response to the controversy. In video shared on Twitter and TIK Tok, the student is shown on stage during the school’s costume contest, where he appears to be goose-footed, with a step firmly associated with Nazi soldiers, and giving a Nazi salute to a buzzing crowd. Twitter video has gained over 450,000 views since then.

In the photo attached to the post, Powers is standing next to a student in a costume.

A student who created a viral Twitter thread, Alex, whose father asked only to use his son’s first name, said he heard about the costume from friends the day after Halloween and began asking his classmates. From there, Alex said he decided to take action.

“I decided to ask as many people as possible who had shared with him,” said Alex. “People were sending me screenshots from Instagram, Snapchat, and I decided to move to Twitter because I thought I had to do something about it because we just can’t let this behavior continue.”

Last week, the Chicago Teachers’ Union called for Powers to be removed, and the students planned a strike. In an email to students and parents, Martinez confirmed the students’ plans to protest, stating that CPS security and staff would be present and students who did not return after the strike would be given unexcused absences.

The initial plan was to strike, but student Jaheim Jonson, one of the organizers, said that after reviewing the school’s code of conduct, they felt that a sit-in strike would better protect students from the risk of a strike.

Although Powers had been stripped of his duties, Johnson, a member of the student-led Black Coalition School, felt it was important to keep taking the position. He said that for this high school final exams, the answer of the students had been waiting for a long time.

“It’s just a cumulative build-up of every single incident of racist and ethnic misconduct and discrimination reported to the administrator, and they choose to ignore our concerns,” Johnson said.

Gabriel Willis, the elder of Jones, said his siblings, who left school seven years ago, witnessed the same inaction against racist behavior.

“She’s seen things like that for years,” Willis said. “We’re seven or eight years old, and it’s still happening. Something has to change. “

Johnson said the student protest was planned in just a few days, largely organized by the Black Coalition and another student group, the Jewish Student Connection. Seeing the efforts come to fruition and with high turnout, it was a proud moment, he said.

“We are proud to be able to defend something we believe is right,” Johnson said. “It’s not easy to plan something on this scale in the short time that we could do it, but we got on it and showed up.”

Johnson said he believed the school did not expect such a large student show.

Johnson said Slater initiated a conversation with the students. He appreciated the reach but said he left the conversation feeling skeptical that the new leadership would lead to significant reform.

“It sounded good, but it’s nothing we haven’t heard from an incompetent administration before,” Johnson said.

For Alex, taking part in the sit-in strike seemed “right”, especially after helping to raise awareness of the incident.

“It’s great to see everyone get together and do the right thing,” said Alex. “Unity is inspiring.”

Alex and classmate Olivia Pinsof-Berlowitz said the problem was bigger than any person, including the former Powers principal, stressing that the school’s culture made racism and other discrimination possible.

“There are still certain members of the staff and administration who need to be held accountable,” said Alex. “There is a lot of work to be done to bring about change simply by preventing racist behavior in general.”

Pinsof-Berlowitz, a sophomore at Jones, echoed this sentiment.

“I can’t say it was just the director,” said Pinsof-Berlowitz. “I think there are some ways in which an elite selective registration culture can create some problems.”

Students said that some teachers started talking about the costume incident and encouraged students to share their perspectives. However, Pinsof-Berlowitz said there was still concern that such incidents could repeat themselves, making continued student solidarity even more important.

“Unfortunately, they have not reacted that quickly in the past,” said Pinsof-Berlowitz. “When it is anti-Semitism, there is action about it. There have been so many cases of racism in the past that have gone unanswered. I think they all want to be clear that we will not let it happen again. “