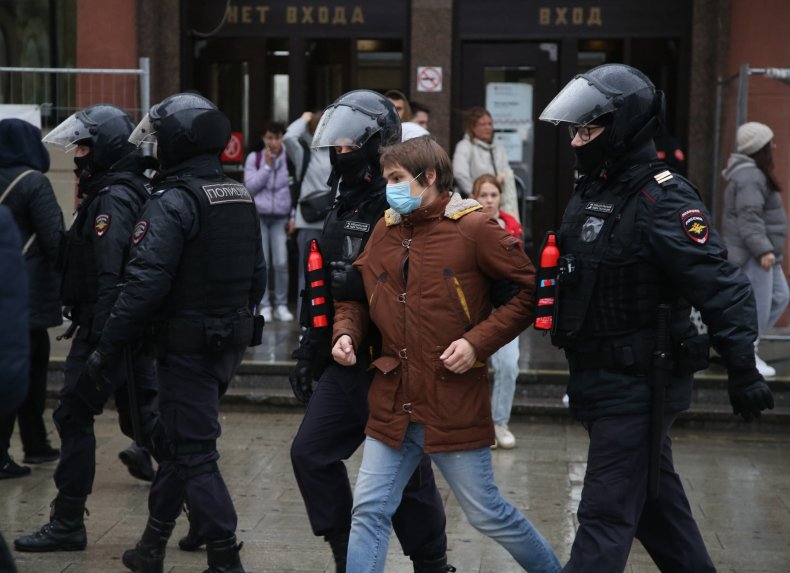 Videos circulating on social media show women protesting in the Dagestan region of Russia demonstrating against military efforts to mobilize Russian citizens for war in Ukraine.

The protests come after Russian President Vladimir Putin announced last week a “partial mobilization” attempt over the country’s invasion of its Eastern European neighbor that began in late February, ordering an additional 300,000 military-trained reservists to fight the conflict.

In one of the videos published by Julia Davis, columnist for The Daily Beast, you can see women confronting policemen in the street.

Another video shared by Anton Gerashchenko, adviser to the Ukrainian interior minister, shows women chasing a policeman during a protest as he escapes.

The Belarusian NEXTA media also posted footage of the protests on Twitter. In one of the films, women sing in front of a policeman.

“Women in #Dagestan explain to the cops that #Russia att*cked #Ukraine and start chanting “No to war!” he tweeted.

Meanwhile, another video shows an officer pushing a woman during a protest.

Ruslan Akhalchi, an activist of the “Dagestan Observers” movement published a video showing a woman telling a group of men about the war.

According The Washington Post, the woman is a military recruiter who criticized them for not joining the war.

“These kids will fight for their future,” reportedly says the woman in the film.

Tweeting a video that has been watched over 300,000 times, Akhalqi wrote: “Mobilization in Dagestan is not going too smoothly: – My grandfather fought for the Motherland! – In the years 1941-1945 we fought, it was a war. And now it’s not war, it’s politics.

The newspaper also reported that Russian officials sought to recruit 13,000 men from Dagestan, which is located in the North Caucasus and is a mostly Muslim area.

The announcement of Putin’s partial mobilization sparked protests across the country that led to mass arrests. By Friday, Russian authorities had arrested nearly 1,400 people in 38 cities in connection with the mobilization protests.

According to the US think tank Institute for the Study of War (HEI), Russia’s new mobilization pressure “overwhelms the ineffective and unmotivated bureaucratic system and may not generate much-needed, combat-ready reserve forces in a short time.” time or not at all. “

“Russian efforts to partially mobilize in the first days face serious and systemic problems, causing widespread discontent and creating conditions for the creation of mobilized reserve forces incapable of carrying out the tasks set before them by Russian President Vladimir Putin,” added the think tank.