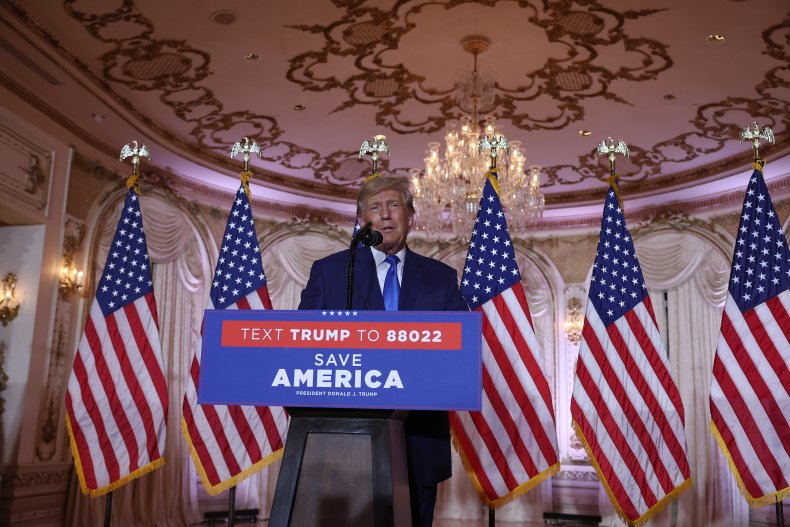 Donald Trump on Friday criticized how Democrats are making modest gains in their mid-term races against Republicans in Arizona and Nevada.

“Democrats find all kinds of votes in Nevada and Arizona. What a disgrace to be allowed to do so! “ the former president wrote on its social media platform, Truth Social.

It was unclear what Trump specifically criticized in the vote in both states, but Democratic Senate candidates in both venues are narrowing the gap between themselves and GOP opponents. In Nevada, Democratic Senator Catherine Cortez Masto garnered 48 percent of the vote, compared with 48.97 percent of Republican Adam Laxalt on Friday night.

Cortez Masto won 8,716 new votes on Thursday night, according to CNN. The most votes were in Clark County, which surrounds Las Vegas, where Cortez Masto won 61 percent of the vote, compared with 34 percent for Laxalt.

Laxalt won a total of 5,509 votes on Thursday. About 105,000 votes were not counted in Nevada that day, CNN reported.

The Governor Race in Arizona is another competition in which the Democrat is leading. Secretary of State Katie Hobbs did he received 50.5 percent voter support, up from 49.5 percent of Republican Kari Lake on Friday night.

This race for governors takes place in a state that narrowly backed President Joe Biden in 2020. If he wins, Hobbs, who has worked for many years as a social worker, will become the Grand Canyon’s first democratic governor in over a decade.

According to polls, the race was fierce throughout the campaign. On November 4, Trump-backed Lake won the FiveThirtyEight aggregate poll, with 48.9% support for 46.4% Hobbs.

Lake was named a controversial candidate after she falsely claimed that the 2020 presidential election was “rigged” and “corrupt.” Last month, she was confronted by a string of officials who collaborated with Trump to debunk her claims of electoral fraud. During an interview on CNN State of the Unionco-host Dana Bash asked Lake about the fraud allegations before showing her the roll.

Meanwhile, Sarah Robinson, Hobbs’ campaign communications director, said: Newsweek before election day: “Every poll shows that this race is dead heat. We see enormous energy and momentum on the campaign path, and our message of lower costs, protecting fundamental freedoms and defending our democracy is echoed by Democrats, Republicans and independent voters.

“We are confident the people of Arizona will make their voices heard and vote for common sense instead of chaos,” said Robinson.