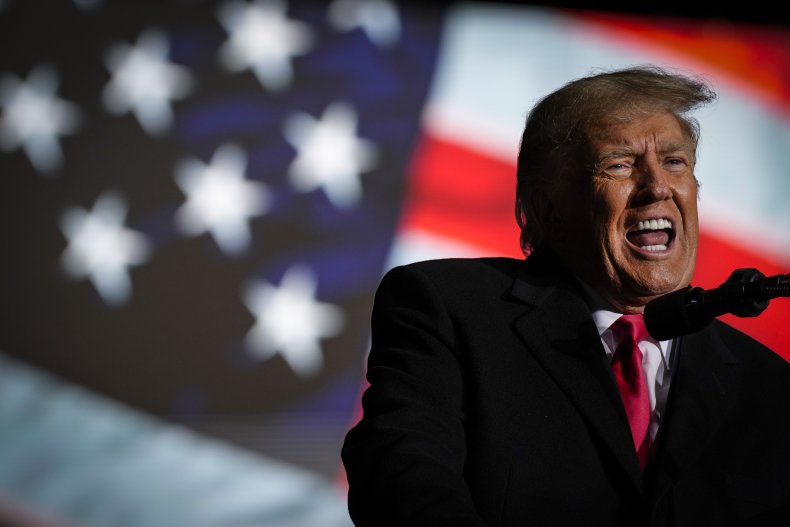 Donald Trump has once again defended the removal of documents from the White House after he leaves office, suggesting the country would be “better” if it still had access to nuclear codes.

At a political rally in Dayton, Ohio, backing many of his mid-term approved candidates, the former president continued to express his regrets about his investigation of classified material recovered from his Mar-a-Lago resort.

Trump claimed that other presidents took materials away when they left office, mentioning Bill Clinton keeping presidential papers in a sock drawer while in office.

While Clinton did keep the tapes he later used to write his autobiography in his sock drawer at the White House, none of them were secret or top secret.

“I’m the only one who can’t take anything,” Trump said Monday night. “But maybe our country would be better off if I really had nuclear codes, because our enemies will be afraid, as opposed to them now.”

Trump added that Clinton “lost the nuclear codes” while the president, an old claim first made by General Hugh Shelton, who served as Clinton as chairman of the Joint Chiefs of Staff, in his 2010 memoirs. Without hesitating: The Odyssey of the American Warrior.

Trump has repeatedly pushed for false equivalences, defending the fact that in August the FBI seized presidential documents from his Florida home, including stating how other presidents such as Barack Obama, George Bush, and Clinton removed and then stored millions of White House material from the placement them in the library.

While presidential materials were removed from the White House at the end of the Obama, Bush and Clinton administrations, they were still maintained and owned by the National Archives and Records Administration and stored at the NARA facility

Under the law introduced after the Watergate scandal, every presidential document must be sent to the National Archives when the president leaves office, which Trump is accused of not doing, taking thousands of papers to Mar-a-Lago.

None of the material temporarily held at NARA facilities was classified, top secret, or personally handled by former presidents or their administrations.

“All such temporary facilities met strict archiving and security standards and were managed and operated exclusively by NARA personnel,” the National Archives said in a statement on October 11, rejecting Trump’s frequent claims.

“Reports indicating or suggesting that these presidential files were in the possession of former presidents or their representatives after they left office or that the files were kept under substandard conditions are false and misleading.”

Also at the Dayton rally, Trump seemed to give another indication that he would finally confirm his intentions to run for president again in 2024. In the days to come after the “critical” half term.

“And I would say forcefully that these are elections that save the country,” said Trump. “I’m going to make a very important announcement on Tuesday, November 15, in Mar-a-Lago, Palm Beach, Florida.”

Trump was contacted for further comments.