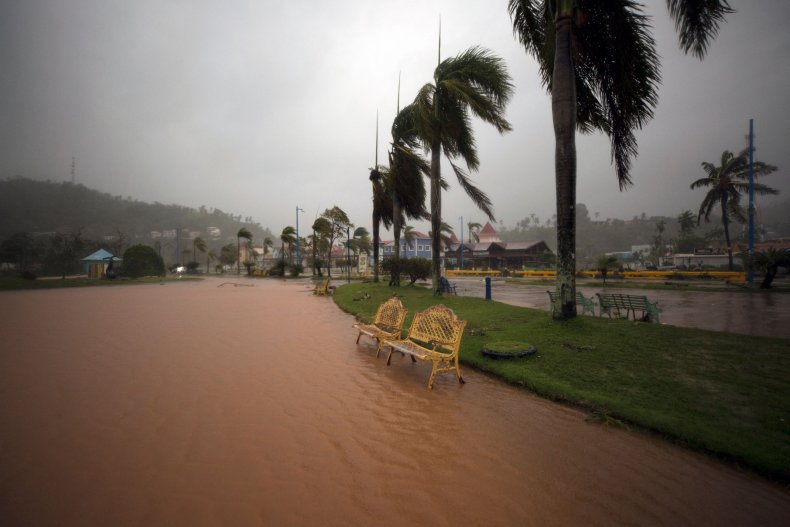 The National Hurricane Center at the end of Sunday said Ian had increased wind speed from 45mph to 65mph in just three hours. The next update at 2am ET on Monday could upgrade Hurricane Ian as a Category 1 storm as it continues to travel across the warm waters of the Caribbean Sea.

The most recent cone-shaped path has a storm landing in Florida just north of Tampa and St. Petersburg along the west coast of the state.

Florida Governor Ron DeSantis has imposed a state of emergency in 24 counties, but this has been extended to the entire state.

Ian formed on Friday and was originally scheduled to hit the southwestern coast of Florida, Fort Myers, and Naples, but the storm continued westward in the Caribbean and its projected path had shifted as far as the Big Bend area of ​​Florida, which is near Apalachicola in Port St. Joe and close to Tallahassee. But the latest news from the NHC shows the storm is turning east, meaning a landfall further south.

The slightest movement of Ian to the east or west could shift the conical path from Biloxi, Mississippi back to Fort Myers. Tampa, which is located in southern Florida along the Gulf of Mexico coast, is likely to experience high winds and rain regardless of change, and may also see a direct impact.

Ian is projected to escalate into a Category 4 storm in the Gulf of Mexico, which would mean sustained winds of at least 130 miles per hour. It is projected to land as a Category 2 or 3 storm somewhere along the Gulf Coast of Florida anywhere between the north of Tampa and all the way to Port Charlotte. However, the path may change with each advisory update.

Ian formed Friday during churning in the Caribbean Sea, where he took a more decisive turn over warm waters. The storm is predicted to pass over western Cuba, which is relatively flat. Storms that pass over mountainous areas tend to break up, meaning Ian is likely to remain intact as it passes through the low-lying parts of the island. Western Cuba is already under hurricane warning. South Florida is already seeing tropical storms, but that is likely to turn into warnings in the next or two days.

The tropical season of 2022 has been very weak so far, and hurricanes have not hit the US so far. There is another system building in the Atlantic basin that can become a tropical storm or hurricane. He follows a similar path that Ian took towards the Lesser Antilles and South America.

The last major storm to cross the Atlantic basin was Hurricane Fiona, which became fatal as it passed over Puerto Rico. This storm turned north into the Atlantic Ocean, where it became a Category 4 hurricane. Eventually, he landed in Canada.