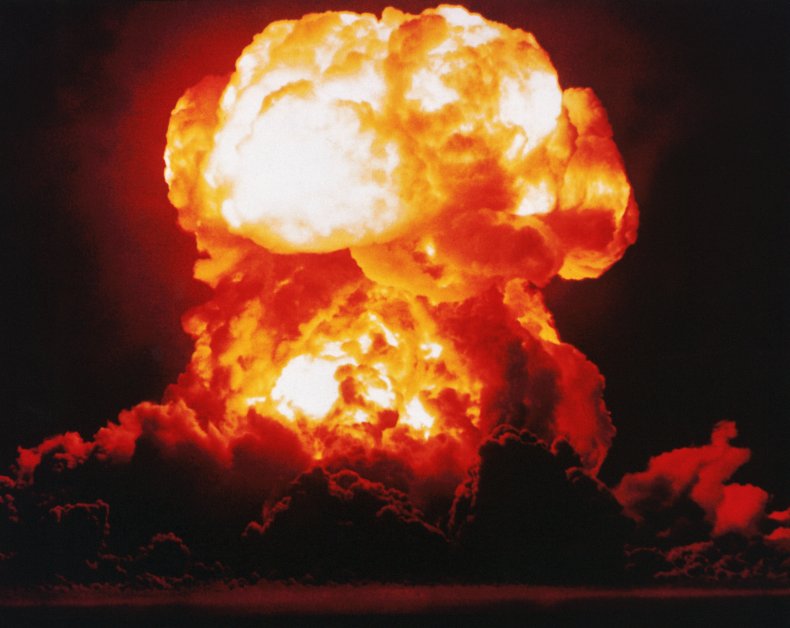 The US hydrogen b*mb test in 1954 dumped an estimated “two hundred billion pounds of coral reef and seabed” after the weapon’s yield turned out to be nearly three times what American scientists had expected.

The “Castle Bravo” test took place on March 1, 1954, on Bikini Atoll, a coral reef that is part of the Marshall Islands.

After the explosion, the radiation spread to 15 separate islands and atolls, causing many to be evacuated, and the locals later suffered from c*ncerous tumors and birth defects.

Eric Schlosser wrote about the test, then the largest artificial explosion in history, in his 2013 book Command and Control: Nuclear Weapons, the Damascus Accident and the Illusion of Security.

Bernard O’Keefe, the chief scientist at the bunker where the explosion took place, described how the building looked as if it had been moved by a nuclear blast.

According to Schlosser, another scientist in the bunker commented, “Is this building moving or am I dizzy?”

He later described how during the explosion the bunker appeared to be “lying on a bowl of jelly”.

Describing the aftermath, Schlosser wrote: “A light rain of white ash began to fall that looked like snowflakes. Then pebbles and rocks began to fall from the sky.

“The men ran back into the bunker, slammed the door, detected high levels of radioactivity in the bunker and, after a few moments of confusion, turned off the air conditioner.”

While this caused the radiation level inside the bunker to drop, it continued to rise outside.

The b*mb’s greater than expected yield, along with a change in wind direction, resulted in a larger fallout zone than predicted.

After 48 hours, the inhabited islands of Rongelap and Rongerik were evacuated due to radiation.

In 1957, the residents were allowed to move back to Rongelap, but found that the food they ate either disappeared or made them sick, leading to second evacuation.

The disaster occurred in the early stages of the Cold War, when the United States was in competition with the Soviet Union, which conducted its first nuclear test in 1949. The only other nuclear power at the time was Britain, which successfully tested its first atomic b*mb in 1952.

In late October this year, Russian President Vladimir Putin oversaw a nuclear exercise that was described on state television as mock att*cks on the US and UK

In the same month, President Biden warned Russia that using nuclear weapons in Ukraine, where Kremlin forces had suffered a number of setbacks, would be a “major, serious mistake.”

In the event of a nuclear att*ck on the United States, President Biden could board one of four “doomplanes,” modified Boeing 747-200s designed as mobile command posts during a nuclear conflict.