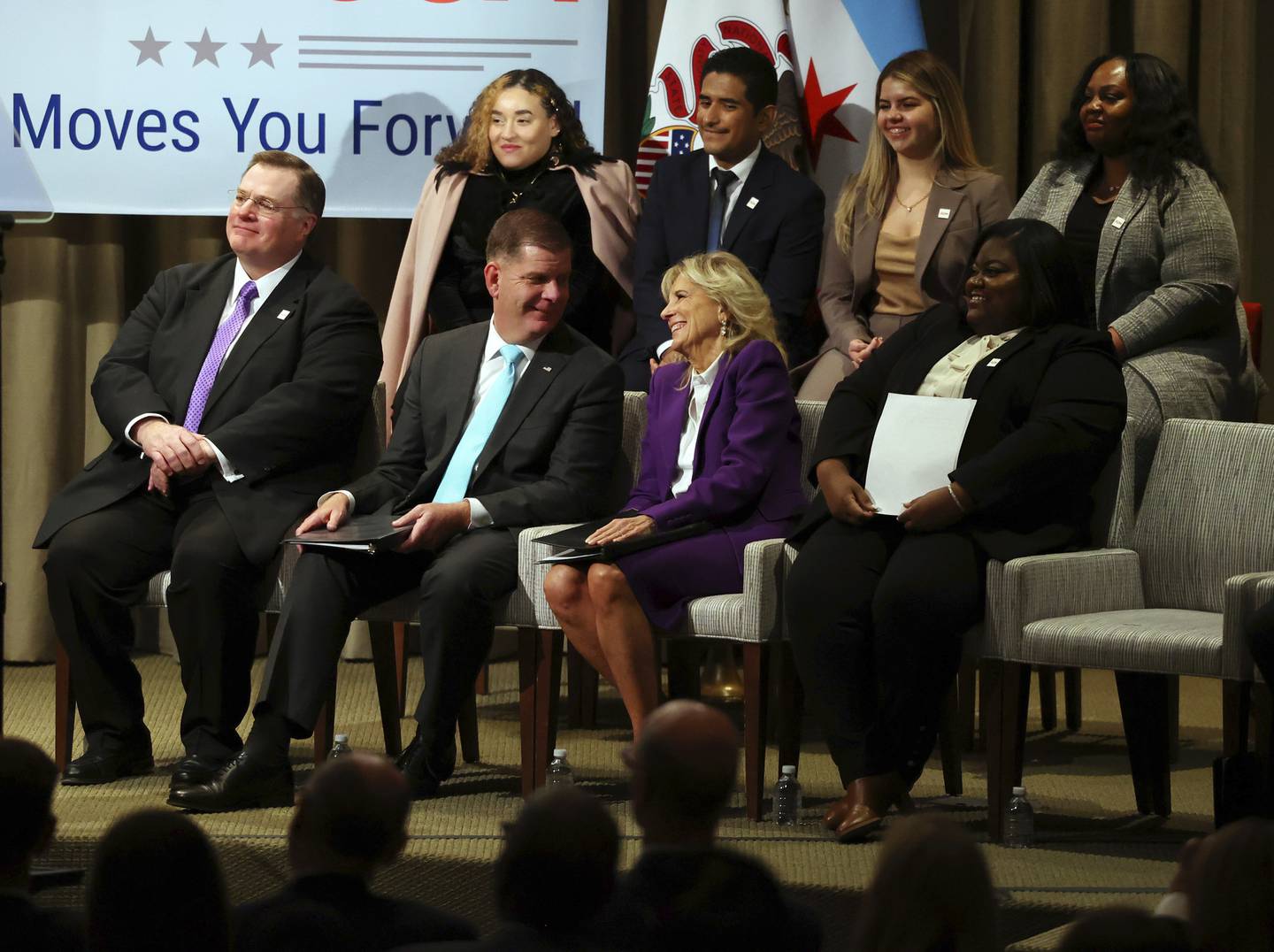 Speaking at the Aon Center in Chicago, Biden said investing in apprenticeship programs is a key goal for the administration to revive the economy. She highlighted how registered apprenticeship programs and community colleges can open up jobs, especially for job seekers in underrepresented communities, towards in-demand corporate careers such as technology, finance, insurance and banking.

“Joe knows that this stream of support from high school to college to career is the future of our workforce and that’s why we’re here today,” she said.

The trip comes amid some high-profile layoffs in the tech industry in recent days and ongoing fears that the US could see more job cuts if the country enters a recession, although last week’s inflation report gave some cause for optimism. Thursday’s report showed consumer prices rose 7.7% in October compared to a year earlier, down from a peak of 9.1% in June.

Federal Reserve Vice Chair Lael Brainard said during a discussion in Bloomberg on Monday that she was encouraged by the report and expects the Fed to slow down the pace of rate hikes.

During her Monday visit to the Aon Center, Biden spoke to hundreds of people, including members of the Chicago Apprentice Network and the Business Roundtable, recalling her husband’s upbringing in Scranton, Pennsylvania, saying that the struggles his own family faced further motivated him to create stronger career paths.

“Resilience and strength that Joe learned from watching his father raise his arms and rebuild their lives in a new city,” she said. “His dad used to say, ‘There’s more to a job than a paycheck.’

She highlighted the administration’s efforts to expand opportunities for career-related learning. “We have an opportunity for real, two-way progress by building pathways that work for all students,” she said.

At Monday’s event, Terionna Wilson, a reinsurance trainee at Aon, shared her experiences growing up on Chicago’s West Side as one of six children. Struggling to support herself in her previous job, she applied to the Aon program in 2021 after her sister was successful in practicing. He is currently pursuing a business degree from Harold Washington College while studying at Aon, earning income and full benefits.

“I really couldn’t feel more stable and blessed,” she said. “The apprenticeship program has changed not only my life, but also my family’s life.”

Before visiting the Aon Center, Biden stopped at Rolling Meadows High School in District 214 to meet students in the school’s Career Pathway program.

Career paths, which David Wietrzak, head of the Career and Technical Education Department, said started 12 years ago with two offers in health and manufacturing, now offer 16 different paths for students who want to study in various fields, from marketing to tourism and hospitality.

Biden said the District 214 program exemplifies “part of Joe’s vision” for the future of the country’s economy.

“Not everyone needs to have a four-year degree – it’s about the job,” she said.

Raimondo said more students trained in engineering and manufacturing would be important as the Department of Commerce worked to implement the CHIPS bill, touted as a way to speed up semiconductor research and production in the U.S.

“I’m glad you’re getting ready because we have a lot of work to do,” she told district officials and students.

Biden and other visiting officials put the skills of the young engineers to the test, while Biden, Cook County Board President Toni Preckwinkle, and Cardona took turns operating a robot made by Rolling Meadows senior member Ethan Salibio.

Career access and technical education programs are gaining momentum in the Northwest Suburbs, especially those aimed at special needs students.

Last week, officials from Maryville Academy’s Jen School began construction on a new 56,000-square-foot facility focused on vocational and technical education for up to 120 special education students in Niles.

It’s a major expansion of the school, which principal Ann Craig said operates on 18,000 square feet of the current Des Plaines facility.

In nearby District 219, the Bridges Adult Training Center recently received from Target Corp. a $40,000 grant to set up a vocational training laboratory for special education students aged 18-22.