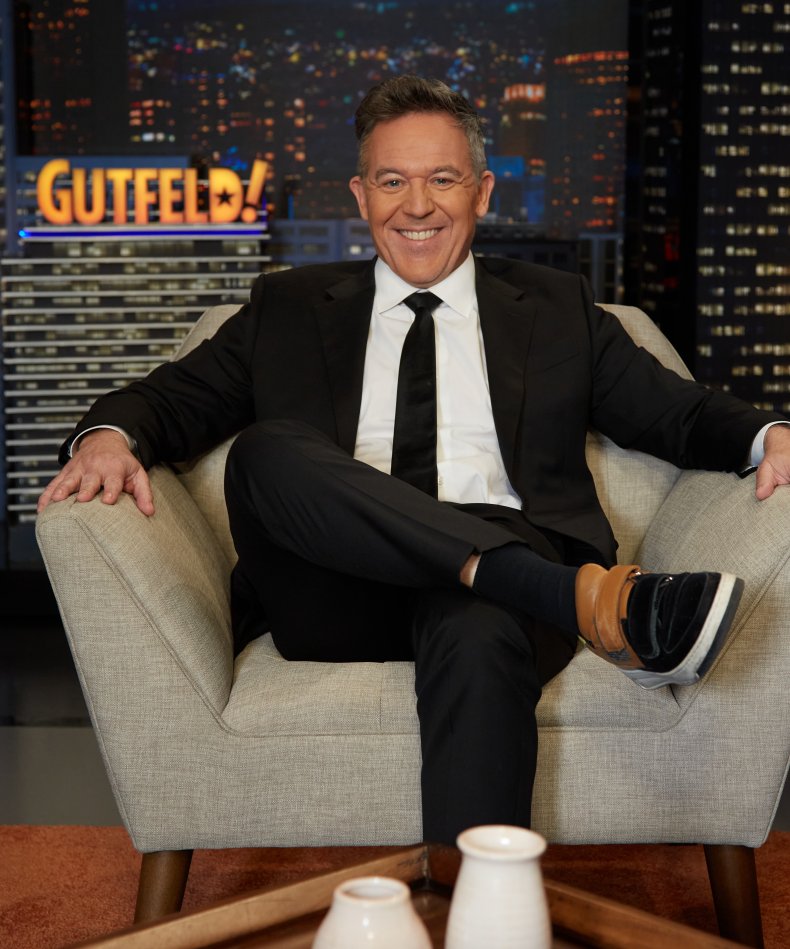 Newsweek reported 13 months ago that Greg Gutfeld became the new king of late night television when, according to Nielsen data, his Fox News show: Gutfeld!has gained a larger audience each week than those hosted by Jimmy Fallon on NBC, Jimmy Kimmel on ABC, and Stephen Colbert on CBS.

Since then, Gutfeld has defeated the big three broadcasters on several occasions, including in the last six-week run, perhaps cementing the notion that nonpartisan comedy – or at least guerrilla as much – from Johnny Carson and Jay Leno is a thing of the past.

Newsweek asked the new, sporadic late-night king to reflect on the matter in Q&A, and not refrain from criticizing the contest while advising Sunny Hostin, co-host Viewwhich recently echoed on social media after she criticized conservative politician Nikki Haley for not using the Indian name she was given at birth.

NewsweekWhy do you often have more viewers than Colbert, Fallon or Kimmel even though they are on free TV and you are on the cable channel?

Gutfeld: We are playful and unpredictable, and we are not interested in lectures or indoctrination, but in fun.

Newsweek: And the other three aren’t? Do you like any of them?

GutfeldA: All they do is repeat the same assumptions you get anywhere else, so you don’t get anything new. So why bother?

Newsweek: You recently came in first place late at night and Colbert, who is also very political but on the left, was in second place. So it pays to be a guerrilla fighter, and the days of Johnny Carson and Jay Leno breaking both sides are gone?

Gutfeld: No, because I think my program is the least political. We have five blocks, three are cultural, one is political and one is a crossroads. I try to structure it so that if you are watching with your sister and she is a liberal, she can laugh.

Newsweek: But even if your program is cultural, it is political. When you ran a very late show called Red eye Years ago, Andrew Breitbart was a regular guest and used to say that politics is beyond culture. Do you agree?

Gutfeld: Yes, but our site didn’t. We are just playing a game of rules set by liberals who think everything is political. If I have a common-sense opinion on something, it is not my fault, it is political, it is the fault of the liberals. I’m not trying to be political when I say something about biology. If it’s suddenly political, it’s not my fault. I have not changed; have changed.

Newsweek: Give me an example when you say something about biology and then liberals turn it into politics.

Newsweek: What kind of guests did you want on your show but couldn’t get?

Gutfeld: There have been times when people would say yes but then canceled, but they might have good reasons. For example, Russell Brand was due this week but canceled. He might just have had a different commitment. And I was disappointed because I really like Russell Brand. It would be cool. Hope to change the date.

Newsweek: Did you have a favorite guy?

Gutfeld: I like people who I can laugh at and people who laugh at me. That’s why Kat Timpf and Tyrus are there. They are panelists, but a bit like my favorite guests. I like familiar faces – Fox people. Brian Kilmeade is fantastic because I insult him throughout the show and he puts up with it and then he insults me. I like a pool of familiar faces like on The boat of love. AND Five (the Fox News show he co-hosts) is like the real version Friends. It may be strength or weakness, but I feel uncomfortable with people who are uncomfortable. It’s really contagious. If you feel particularly comfortable with me, then I am comfortable.

Newsweek: Roseanne Barr to appear on the Fox News streaming service. Have you ever had it on your show?

Gutfeld: I’ve been recording it for five years. Now that Fox Nation is doing, I hope he will do my show. I know she watched it and liked it before it was canceled. She would be a scream. But I don’t know if she would go (to New York). A lot of people don’t. They are too rich.

Newsweek: Speaking of dismissal, what do you think of Hollywood or leftist activists trying to dismiss comedians like Roseanne, Ricky Gervais and Dave Chapelle for telling hateful jokes?

GutfeldAn interesting trend is that the biggest stars in England are anti-annulment cultures like Russell Brand, Ricky Gervais and all Monty Python alumni. These guys are really funny and nervous so that’s a really good sign. This is the thing where if they tell you not to do something, it ends up creating something better as a rebellion. “You think we’re too mean, then we’ll be really mean!” The cancelers always blur because they have nothing; they say you are insensitive and put a target on someone’s back because of your words. This can be used on everyone, so comedians like Gervais and Chapelle have gone even further.

Newsweek: Are you being att*cked by critics?

Gutfeld: When you are in Fox, you are always att*cked, and always by the same people. How boats have barnacles attached to each other, or a giant fish provides food for tiny fish. This is what I was for microbloggers on The daytime beast and media matters. These are the people who are paid to watch Five and Gutfeld! then write about it. It must be demoralizing that your entire career builds on someone else’s. I create jobs for really unhappy people. I feel sorry for them. The only reason I make fun of them is because I realize they are not having a good time.

Newsweek: Speaking of Media Matters, their latest claim is that you are a book banner.

Gutfeld: I’m not. It was funny. But I didn’t read it. All their trick is that you don’t read the story, just the headline. It shows up on the channel and I don’t read it and nobody reads it. These kinds of things don’t have gas. It used to be these left-wing parties that attracted attention, creating controversy that was not there. When you do it over and over, people get used to it. When you see the header too hard on your nose at the top, you know that if you click on it you’ll be upset because it’s not real. All those post-Fox creatures are suffering from diminishing returns. Everyone can see the trick and the fact that it is a financial matter for a few pennies here and there.

Newsweek: Will any of these att*cks on you ever turn into threats involving security or cops?

Gutfeld: That’s true for most of the people at Fox. I learned early not to complain about d*ath threats. Don’t complain about it. This is the life I have chosen. I am dealing with serious matters. Everyone in the public eye does this thanks to social media, television and a population of 370 million people. The threat of d*ath is not the same now as it used to be. The crossbar has been lowered. You’ve been drinking people on Twitter saying different things. You have to let it drain off of you. But some things are more serious, like when they say they know where you live, and it’s important to continue.

Newsweek: How did you get from a liberal student at UC Berkeley to a conservative talk show host?

Gutfeld: Coming out of the bubble. If you live in a bubble, you can’t see the corner. I said it further Five and that’s the best thing I’ve ever said as it encourages people to leave the bubble where there is no one else to come up with. The reason Sunny Hostin is on View she made fun of Nikki Haley’s name because she didn’t realize she was falling into a trap. She didn’t know it would affect her. Her name “Sunny” is a nickname and Nikki’s name appears on her birth certificate. If she lived outside her bubble, she would have seen around the corner.

Newsweek: You keep making fun of MSNBC and CNN. Is there anyone on these channels you like?

Gutfeld: I watch them for entertainment; they are so angry and confused. I think CNN is just a curiosity. I can see that they are making some progress, but they are definitely not in the middle. They are trying. They made some good hiring moves. I never cheer for people to get fired, but they have ways to get it.

Newsweek: Suppose this Q&A has already been published and some people in the comment box criticize me for providing you with a hate throwing platform. Any answer?

Gutfeld: I don’t care about all of that. Who’s the ass? Why should I even consider it? Why would you? It’s offensive to you, not me. Someone tells you that you can’t pick a topic they don’t agree with? You should be offended. You should be the one to say “go f*ck yourself.” It has nothing to do with me. You have to develop there.

Newsweek: Why does it seem like there are so many more liberals in comedy than conservatives?

Gutfeld: That’s not true – if people say there are no conservatives in comedy because conservatives aren’t funny, I don’t think they know who a conservative is. If you go back to history and look at some of the great comics, they would never be considered liberal today, and now to be a leftist comedian only means to be leftist, replacing comedy with petting, signaling virtues with lectures.

Newsweek: I’ve seen articles and books warning of the rise of conservative comedy. What are the liberals afraid of?

Gutfeld: The audience on both sides of the aisle is tired of being spoken to and looking for something to make them laugh that is not constantly hammered into leftist issues. The late night shows have been choosing from the same buffet for years and it’s just not fun. They look at the numbers and know their audience is leaving. They forgot that more than half the country disagrees with them.

Newsweek: What is the most interesting topic to talk about on your two programs?

Gutfeld: The world is never boring. If the world bores you, that’s your problem. Every day I can find something to talk about, and I’m lucky Fox trusts me to do so.