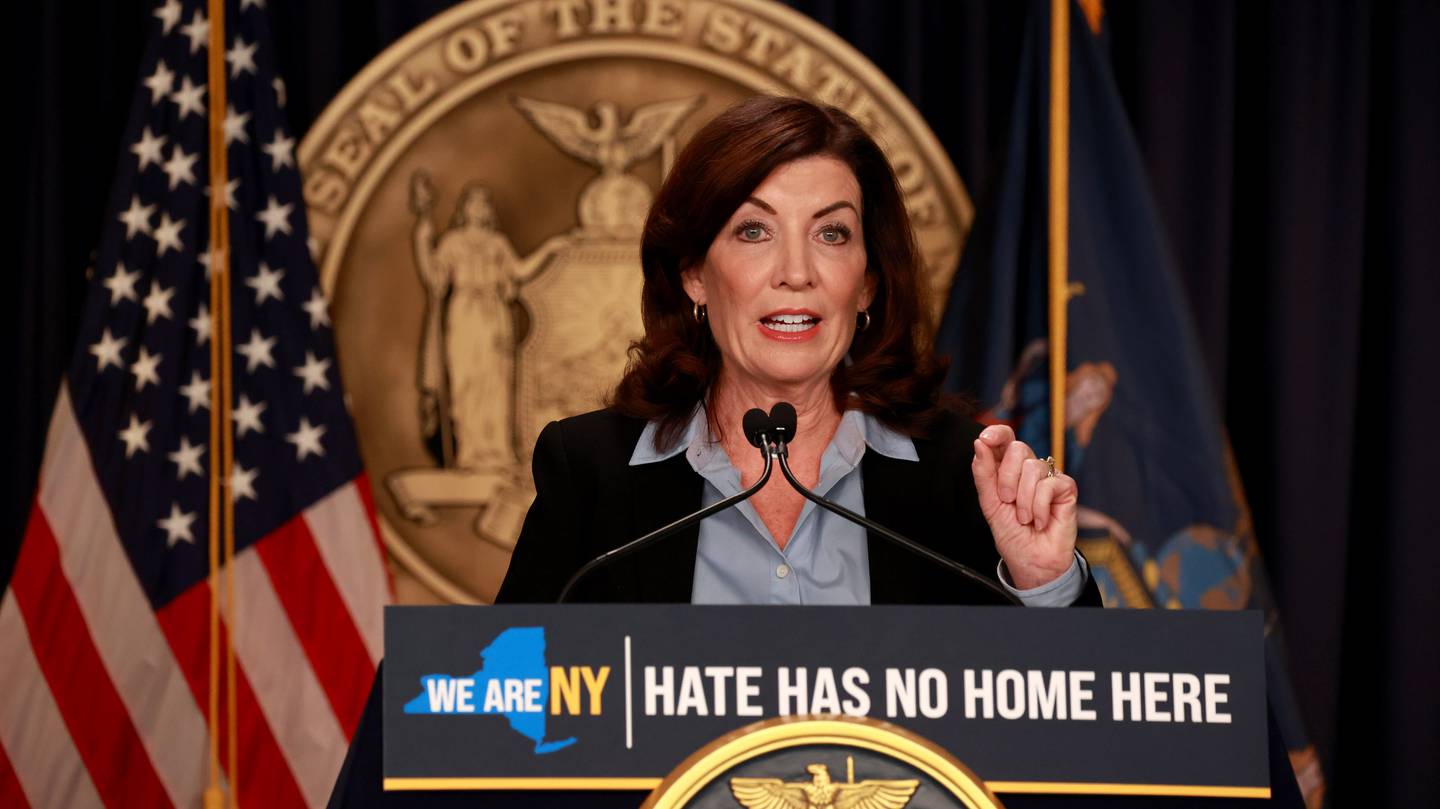 In response to a spate of hate crimes in the city and across the United States, Governor Hochul signed two anti-bias bills on Tuesday and urged New Yorkers to reclaim the state from the bigots who sl*ughthered the community’s sense of security.

Hochul, who led the state through a racist massacre in Buffalo last spring, said the horrific mass shooting at an LGBTQ nightclub in Colorado and a sinister anti-Semitic plot thwarted in New York City over the weekend were “a painful reminder that a wave of hate is coming to our country.”

“This is our defining moment, New Yorkers,” the governor declared at an emotional press conference in Midtown Manhattan.

“Each of us has a role to play,” said Hochul. “From this day forward, ask yourself: did I do anything to help spread the love that should be a part of who we are as New Yorkers?”

“We’ve had a very difficult week,” said State Senator Anna Kaplan, a Democrat from Long Island and the child of a Jewish family who fled religious violence in Iran in her youth. “It’s up to us to find a way to show that hate has no place in our communities.”

The governor said the program has already awarded $83 million to more than 600 organizations.

According to NYPD data, the announcement and signing of the bill coincided with a 16% increase in reported hate crimes in the city this year and 129% in two years.

The numbers reflect a growing concern about anti-Asian, anti-Black, anti-gay and anti-Semitic hostility.

On Saturday night, a rifleman wearing a bulletproof vest entered an LGBTQ club in Colorado Springs, Colorado, and opened fire, killing five people and injuring another 25.

That same night, a man threw a brick through the window of VERS, a midtown gay bar that police say has been the scene of similar horrific att*cks in previous days.

On Friday, Penn Station police arrested two 22-year-old men accused of planning an att*ck on an unspecified synagogue. According to authorities, the men were carrying illegal firearms and a long knife.

And Mayor Adams has promised that the New York City Police Department will be on alert in the weeks leading up to Hanukkah, which begins on December 18.

Hochul said on Tuesday that recent pernicious plots have created “a crisis that is destroying the health of our state.” The governor said the moment required “toughness” and “decisiveness”.

She noted that social media seemed to feed the challenge. Officials said cyber specialists from the non-profit organization of the Jewish community were the first to uncover the plot against the synagogue.

The state has limited powers to remove hate from social media due to federal laws protecting the rights of expression on platforms, Hochul said.

However, she pleaded for congressional and court action targeting social networking sites. She called on New Yorkers across the state to work together to eliminate bigotry.

“Everyone who raises a hand or causes harm to one New Yorker starts a fight with 20 million others,” she said. “Starting with your governor.”