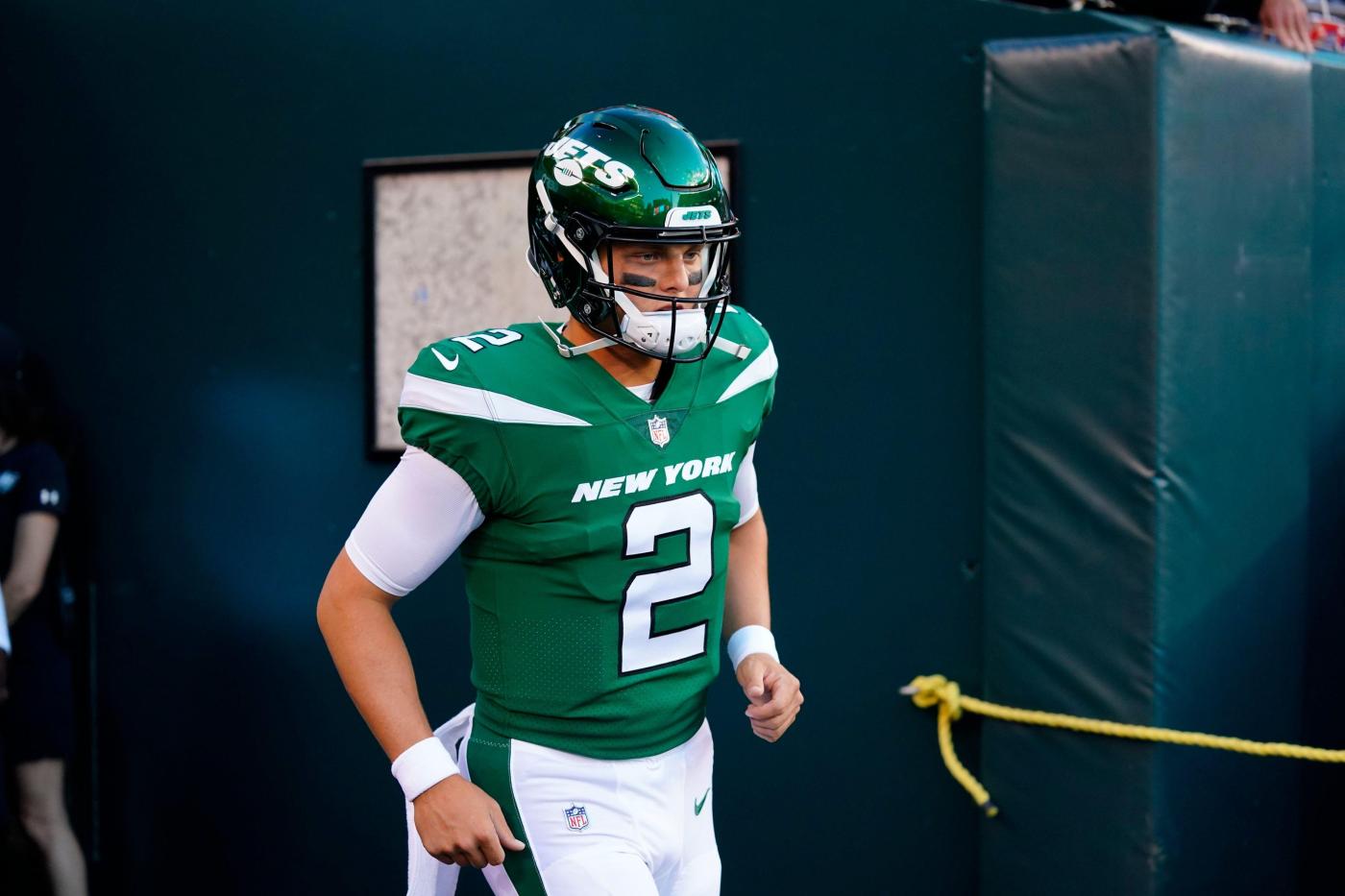 If Zach Wilson plays a match against Pittsburgh on Sunday, which is not a great performance, Robert Saleh will be patient with the second quarterback.

The real question is, will the media show its usual penchant for ledge-jumping by not tolerating yet another highly touted Jets quarterback that doesn’t meet the hype quickly? Especially a cat like Wilson, who with a lot of la-di-da was chosen by the Jets as the second overall pick in Draft 2021.

If the Jets lose to a much-beaten team of Steelers and Wilson has a bad day with a few interceptions (throwing one touchdown during a trash), it won’t take long to figure out which way the wind is blowing. Will the media follow Jetsian Saleh’s lead and show some restraint in its criticism?

The first cue will come from the tone and content of the questions that the chief scribes ask both Saleh and Wilson during the post-match interview session in Pittsburgh. Earlier, when a panel of SNY analysts from the Jets (Bart Scott, Willie Colon, Connor Hughes) give their views on Wilson’s lame performance, they will provide evidence of the type of pressure and expectation the quarterback will face in Week 5 against Miami. Scott is the key here. Despite being allied with the Jets, he never holds back.

If Scott att*cks Wilson, his negative analysis will flow to the other Gasbags. Like Mike Greenberg of ESPN, a famous Jets fan. While Scott’s words would amplify any negative vibes delivered by Greenberg, this man doesn’t need a teacher when it comes to tearing up a Jets quarterback that doesn’t live up to expectations produced by the team. Greenberg and Scott have a forum to double Wilson on “Get Up.” Greenberg can instantly track the movements of the Jets for two hours on his own ESPN radio show.

At about the same time as Greenberg develops his Wilson monologue, Joe Benigno will be setting Wilson on fire during his weekly performance on the WFAN noon marathon show. This is the same show where the undisputed Benigno begged Saleh to go with Mike White after Joe Flacco-quarterback Jets lost the opener to Baltimore. A week later, Benigno, in classic flip-flop mode, returned to the FAN and kissed the Flacco tuchis after the QB veteran led the Jets to win 31-30 over Cleveland.

So, shortly after the Steelers are captured, all stakeholders will know (at least in the media and social media droids) where Wilson’s scenario is going. Chances are, if he turns into a stinker, Wilson will be wrapped in a negative cocoon. However, in this ever-changing Free World, where unwashed masses are looking for someone to believe in, negative attitudes could be replaced by a more optimistic approach. Green and white mongers can actually identify the bright spots in Zach Wilson’s gloomy day.

But don’t hold your breath.

LIFE UNTIL THE MOMENT? YES

Yankees Entertainment and Sports Network’s suits are already talking about producing Aaron Judge Yankeeography. Will Judge be a willing participant in such a production? And if the judge leaves Bombers, will the project remain refrigerated after he takes down the Bronx?

It would be sad. YES has accumulated so much judging material that it would be a shame if it had not been compiled into a full-length documentary. What YES produced on Wednesday night after the referee hit number 61 was of high quality and moving. After Michael Kay made a historic call, the cameras took control.

The shots of the reaction provided evidence that the production team knew they had extra time (the game was stopped) and wisely slowed it down. So, viewers got many majestic reruns of Judge’s bullet in the Jay’s bullpen, with the relief of Judge Patty’s mother and her cuddling with Roger Maris Jr. Judge standing near the bench with her helmet over her heart was another classic shot. And there was the reaction of the Yanks as they watched the ball fly out. And the unique repetition of the judge and Giancarlo Stantons in a toast from a paper cup.

There was more. Everything happened on the fly. The history of baseball was on the line. It was a great moment for the judge. The moment the YES crew lived up to expectations.

During the afternoon radio show ESPN-98.7, which is simulated on YES, Kay said he “never” would question how someone spends money. However, within seconds, he questioned why Mets fans were not making the most of the Citi Field as the Mets struggled to lead the NL East.

Sure, it sounded like he was scolding fans for not spending what’s left of their declining disposable income on Mets tickets. Perhaps Kay should take into account the anemic economy and its inflation component by making unjustified financial judgments.

(NOT) TALKING ABOUT KYRIE

Last week, thoughts vanished about the time to fix the rift between Kyrie Irving and Stephen A. Smith with the philosopher’s superstar Nets who finally appeared in First Take.

Irving still had a problem with Smith for characterizing him as a simulator earlier. For the record, SAS didn’t care. Smith: “Kyrie and I probably won’t be talking again in life.” Man, that’s a long time.

“I don’t lose a minute of sleep because of it,” SAS told FT. Then Smith actually revealed the secret of his success. And why can he live without Irving.

The Remote Warrior, YES’s Paul O’Neill, said Aaron Judge was sometimes “unable” to practice batting. Considering O’Neill’s not on the pitch (making matches from his Ohio home), how would he know? … Robert Griffin III of ESPN should stop whining. In a pre-match interview Monday night with Saquon Barkley, RGIII threw a pity party for the fleeing Giants. RGIII discredited any “haters” who dared slander Barkley. Very lame. … Russ Salzberg brings his Get a Load of This podcast to the YES app. Since the app has a video component, Salzy will likely do the cast taking out their famous moth ball sweaters. … Even the NFL-Crazy Manning Brothers at the MNF night, thought Jerry Jones and the people in his apartment at Giants Stadium, overreacted when they exchanged kisses after the Cowboys scored. Unfortunately, Jones spent a lot of airtime (he also gave an interview during the pre-match show) at the Cowboys-Giants. ESPN suits know where their NFL bread is buttered. … Most of the national MLB TV partners (TBS, Fox, ESPN, MLBNetwork, Apple TV) have sent teams to work on a potential 60, 61 games of HR Judge. Everyone ran into a zippo. As it turned out, two historic HR matches were broadcast – only for YES. … I listened carefully to MNF’s new ESPN broadcast team, Joe Buck and Troy Aikman, and I can safely report that they sound exactly the same as on Fox. Amazing!

GUEST OF THE WEEK: BEN SIMMONS

Give a purported star to Mercurial Nets. He sat down and gave in-depth, thoughtful answers on the popular JJ Redick podcast. In the early sessions, Simmons also dealt well with the media coverage of the team. Simmons seems to understand what to do on the way back.

DWEEB OF THE WEEK: BRANDON STALEY

For his questionable decision making. Chargers coach allowed Justin Herbert, his struggling and sick quarterback, to stay in the game (at the end of the fourth quarter) in a no-win situation. San Diego conceded 28 points to Jacksonville. Staley excused himself by saying that Herbert wanted to stay in the game

What Kayvon Thibodeaux He wanted to say, “Sorry, I’m not a one-man demolition crew.”