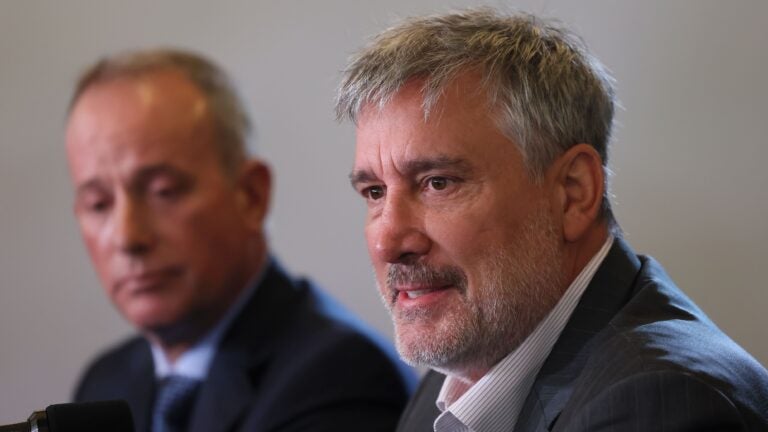 Calling it his greatest regret as CEO of Bruins, team president Cam Neely said the franchise made serious mistakes when verifying and signing Mitchell Miller.

The most important of them: “We didn’t talk to the family,” Neely said, referring to Isaiah Meyer-Crothers, a black developmental disability classmate Miller had been harassed for several years.

“We dropped the ball,” said Neely, “and I’m here to apologize for that.”

Neely said it was a failure of the Bruins hockey department that he failed to discover the extent of Miller’s disgusting abuse of Meyer-Crothers. They believed Neely said Miller made a particular mistake when he was 14 and did a job to improve.

Neely did not know the details of this job.

“From everything I heard, he worked on himself, worked on programs to improve himself,” said Neely of the “new information” the team shared while breaking their bond with Miller. “I had the feeling that he was a 14-year-old who made a really, really bad decision and did some terrible things, and he is now 20, so it felt like he has done a lot of work on himself in the last six years.”

Why would the Bruins buy Miller when they are the hottest side in the league?

“Time was never going to be right,” said Neely. “It was about whether we were doing it or not, and we made the wrong decision.”

Here are some conclusions from the Neely press conference.

Cam Neely: This “disturbing” team did not speak to the victim’s family

Neely said he was “about” the Bruins who had not spoken to Miller’s victim’s family.

Why not? “That’s a great question.”

Neely apologized to Meyer-Crouthers in his statement on Sunday night and said he would contact the family.

When asked if he believed the team had spoken to the Meyer-Crouthers family, Neely said “he shouldn’t assume anything.”

Did Neely talk to Miller?

Neely did not speak to Miller directly about the decision to cut him off.

He said that before Miller signed the contract, he had a meeting with Miller, Miller’s mother, and Miller’s agent, Eustace King.

What has changed between this day and Sunday night?

“We didn’t have enough information,” Neely said. “We could have dug deeper.”

On Friday, Bruins CEO Don Sweeney said they had been working with Miller for six months.

Neely said the opportunity to sign with Miller “caught my attention in early August.

“… We said that if we are going to do this, we want to make sure he is on the right agenda and understands the values ​​we believe in through diversity and inclusion.”

About the NHL verification and eligibility process

He also said it was a failure as part of the verification process.

Neely was asked what his scouts thought of Miller.

The scouts said they thought Miller had grown from the incident and Neely said he believed in a second chance.

Neely also said he felt Miller would need to speak directly to Commissioner Gary Bettman in order to get admission to the NHL.

Neely wouldn’t say if there would be penalties or penalties for anyone in the organization.

Several teams turned to Miller with interest in signing the contract, a source said in the Globe newspaper. Miller said Friday that the Bruins offered him the best “resources” after he sat down with the management and “opened up about what I have done and want to do in the future.”

Was Neely worried that another team would come over to Miller?

“From my perspective, there was no rush or pressure,” Neely said. “I didn’t care about the other bands.”

So why did Neely opt out?

“It was a decision we didn’t make lightly, I felt he deserved a second chance based on everything I knew.”

About the role of team ownership

Neely said Charlie and Jeremy Jacobs had been informed that the team needed to sever ties with Miller, but it was a decision made by the hockey operations team.

For the answers of the Bruins players

Neely was asked if he was burdened by statements from the current Bruins players.

“There were many factors in that decision,” he said, “and that was one of them.”

Captain Patrice Bergeron said on Saturday that the Bruins had consulted him about a week ago.

“I had my concerns,” said Bergeron. “I shared my opinion. In a way, I think I didn’t necessarily agree with that – to be honest, I think the culture we’ve built up here goes against this type of behavior. I think we are a team built on character and with personalities with character. What he did is obviously unacceptable. We don’t tolerate it. “

Bergeron said he would like evidence of “growth and change” from Miller before entering the room.

“In fact, if he was the same 14-year-old who would walk into this locker room,” said Bergeron, “he would not be accepted, desired or welcome if I was to be honest with you.”

Neely said he and Sweeney spoke to the club on Saturday.

What’s the news for Bruins fans?

“I am very upset that we have made a lot of people unhappy with our decision,” said Neely. “I am proud of the Bruins organization and what we stand for, and we failed there.”