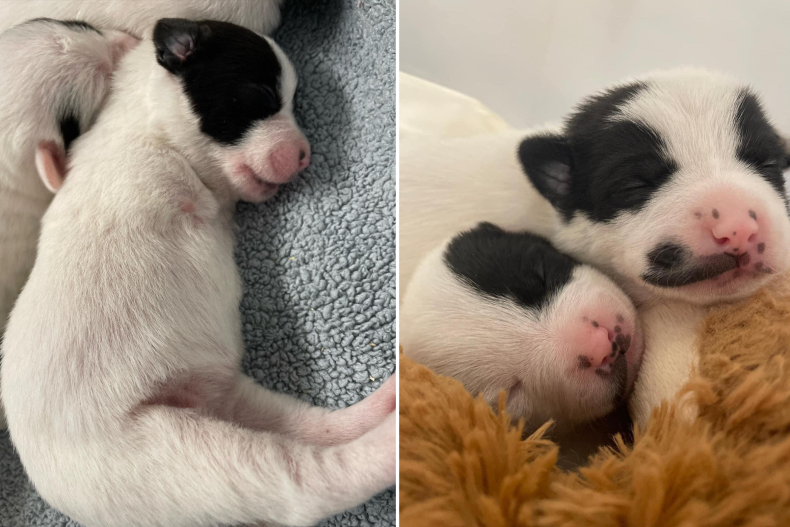 In a Facebook post on Monday, the California-based nonprofit revealed how it saved five puppies with “serious genetic abnormalities.”

Rescued from a puppy mill, the dogs were taken by an animal shelter to be cared for and hopefully re-inhabited.

Skow founded Marley’s Mutts in 2009 in the midst of a deep personal crisis.

“I started the organization after I was diagnosed with end-stage liver disease and had less than 90 days to live,” he said. Newsweek. “When I started working with foster animals after six weeks in the hospital, my body started repairing along with my mind and spirit. A dog named Marley, along with many other foster dogs, helped save my life and set me on the path of redemption.”

Now 14 years sober, adopting and caring for over 10,000 animals, Skow runs a rescue center from a 20-acre ranch in Tehachapi.

Part of a 12-person litter, puppies rescued from the breeder are the result of improper breeding.

“That’s what happens when you inbred dogs or crossbreed them. Some dogs will require a partial amputation so they can live a freer life,” said Skow. “Each of them will need a wheelchair or a prosthesis to help them move around. All five children are bottle-fed, but once they are healthy enough to eat solid food, we will need foster homes for each of them.”

After sharing the puppies’ story on Facebook, Marley’s Mutts received thousands of reactions and hundreds of comments.

“Backyard farming should be against the law,” said one commentator. “We need strong laws to protect animals.”

Another wrote: “Unbelievably sad. These poor children don’t deserve this.”

Currently, the puppies are only about two weeks old, but rescuers hope to eventually find them foster homes.

“The home should be prepared to provide them with a safe environment, help them prop them up while eating and drinking, and be prepared to take stroller measurements and just give them general care and love,” said Skow. “We’ve had countless dogs with their front or hind legs amputated. We at Marley’s Mutts focus on special needs dogs like this one.”

Do you have funny and cute videos or photos of your pet that you want to share? Send them to life@newsweek.com with some details about your best friend and may feature in our Pet of the Week lineup.