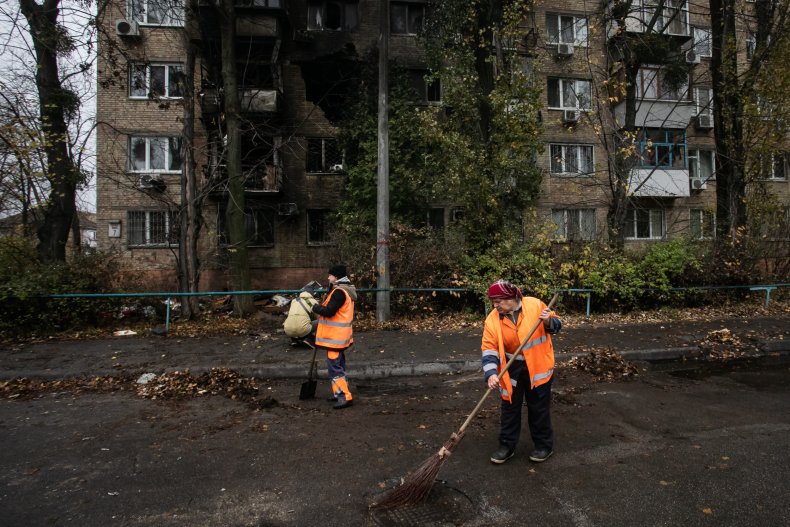 Russian airstrikes in Ukraine are an expression of “holy hatred,” a Russian politician told state television.

“These retaliatory att*cks – and they are retaliatory … are an expression of our hatred, our holy hatred,” he said.

He added that the Ukrainians “will sit without gas, without light and without everything else. If the Kiev regime has chosen the path of war criminals, there they must freeze and rot.”

He added that “ordinary people must take to the streets and put an end to Zelensky’s Nazi regime.”

Chernyshov’s comment came as Kherson, a city in southern Ukraine, came under intense Russian b*mbardment after being liberated from an eight-month occupation by Russian forces, another blow to the Kremlin. Ukrainian President Volodymyr Zelensky walked the streets of the city on Monday, hailing it as “the beginning of the end of the war.”

But on Russian state television, commentators questioned why Ukrainians have not yet risen up against their leader since they are “essentially oppressed.”

“There is no uprising when it seems there should be,” said former Ukrainian politician Vladimir Oleynik.

“Where are the rebellions? We don’t see any riots,” Roman Babayan, the host of the show, added.

Babayan said that support for Zelensky – whom he described as “that guy in the T-shirt” – is high in Ukraine, “if the polls in Kiev are to be trusted.” However, Oleynik warned against trusting polls during the war.

Babayan also asked Oleynik why Russia did not strike Kherson when Zelensky was there, who replied that this was a question for Russian President Vladimir Putin. “That’s what it should be addressed to,” he said.

Oleynik called Zelensky a “terror*st”. “He meets all the criteria for a terror*st,” Oleynik said. “Remember how he was compared to al-Qaeda, bin Laden – his fate is the same.”

One commentator suggested that Ukrainians would eventually turn against Zelensky after a hard winter forced him to negotiate with Russia.

“When infrastructure facilities are pelted with pumpkins every day, when civilians have minimal casualties, but their living conditions in winter are unbearable, ambulances do not work, old people die, as do children … for Zelensky, this will be an argument,” said political scientist Vladimir Sergienko.

“He’ll call [German Chancellor Olaf] Scholz and say: “Scholz, do you remember how you said that you would not recognize negotiations between Ukraine and Russia? Listen, my population is fleeing, we can’t make it through the winter, let’s discuss the terms on which we are willing to sign a de facto surrender.”

However, Babayan concluded that Russia’s att*cks on Ukraine’s infrastructure must continue as negotiations with Ukraine “will not end well for us.”

“It contributes to our victory. For us, victory is absolutely necessary. Any negotiations, if they suddenly start with the Ukrainian side, will not end well for us.

“On the other hand, there is not a single person whom the Russian government and the Russian people can trust. The destruction of our nation is the sole reason for their existence. They openly talk about it. We can overcome this situation only through strength.”

Negotiations are “only possible if there are those who will implement the agreed conditions and clear guarantees,” said Anton Gerashchenko, adviser to Ukraine’s interior minister. Newsweek on Saturday. Vladimir Putin’s Russia “cannot provide it. They are war criminals and pathological liars.”