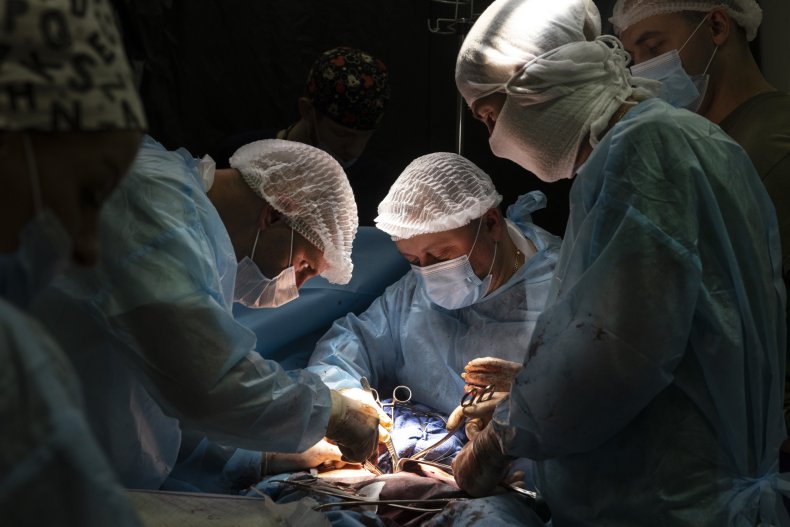 A viral video shared by a Ukrainian journalist on Twitter shows a team of surgeons continuing to operate on a child’s heart in Kiev after a Russian missile plunged the operating room into darkness.

The att*ck caused a loss of power at a Kiev hospital while a child was undergoing heart surgery. AND video shows a team of surgeons continuing to operate under limited lighting. In addition to the glare of the surgeons’ headlights, the operating room is shrouded in darkness. Bright overhead lighting, typically found in operating rooms, is not powered.

“Heart surgery in Kiev. The child is operated on, and the electricity is cut off due to the Russian missile att*ck,” Illia Ponomarenko, an independent journalist from Kiev, wrote on Twitter. “Surgeons operate with their batteries and electricity generators.”

The video lasts almost two minutes and has been viewed almost 350,000 times. It has been retweeted almost 20,000 times.

In the video, the doctors apparently speak Russian, and one Twitter user responded to Ponomarenko’s tweet with a version video which had English subtitles.

“This is how we do heart surgery today,” said the video maker, filming surgeons in the operating room, adding that the operation involves extracorporeal circulation, which the team hoped would be powered by a generator. The child has surgery to replace two heart valves.

During the video, the filmmaker asks another doctor if everything is stable. When the doctor confirms, the videographer urges the staff to “try to finish early.”

“No one knows what happened, but the operating room was completely darkened,” the person recording the video said.

“So Russians, rejoice,” he added sarcastically at the end of the video. “Today this baby is on the operating table. And during the operation there was a complete loss of power. Good job. Very humane people.”

Hundreds of Twitter users responded to the video, many praising the surgeons as heroes.

Following the att*cks, Kyiv Independent tweeted that electricity for Kyiv residents would be reduced to two to three hours a day until power was fully restored.

“[DTEK Executive Director Dmytro] Saharuk said electricity has been restored to around 30% of the city’s residents,” The Kyiv Independent tweeted Thursday night.