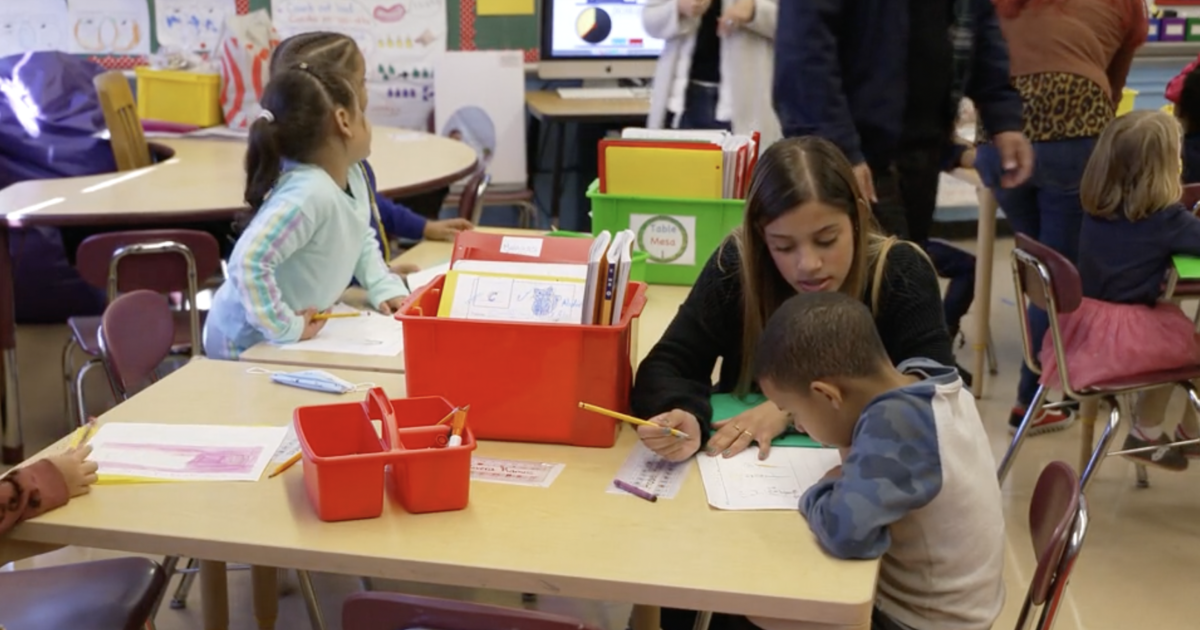 This story is based on a report for song “60 minutes”. which examined how New York was dealing with the influx of migrants being bused into the city, and some of the glaring problems with the asylum system that the crisis had exposed. Watch the “60 minutes” report in the player above.

New York — Ten-year-old Cesar said his favorite part of school in the US is the hot meals. While he’s not a big fan of Vegan Fridays, he said he likes the chicken and pizza served at school.

In crisis-stricken Venezuela, Cesar said in Spanish, “there was no food, no money.”

When Cesar is not attending PS 145, a public school on New York’s Upper West Side, he is reluctant to eat the salads and cold meals served at a converted midtown Manhattan hotel housing immigrant families, according to his father, Ronny, who said the family did not no microwave or refrigerator in your room.

Cesar’s family struggles in New York City. Ronny, whose name is withheld because he has an ongoing immigration case, said he is unable to find work and his wife only works a few days a week at a fast food restaurant. They also face many years of waiting for asylum huge backlog court cases, and their next meeting with immigration officials is scheduled for 2024.

Since the family moved from a hotel near Central Park to a hotel on 51st St. in Midtown Manhattan, Ronny said he was having a hard time paying for the subway to get Cesar to school. However, he said he was doing his best to ensure his son attended the school, which offered Cesar hot meals and even a free haircut outside of class.

“They are very good people,” Ronny said of school officials at PS 145, which serves children eligible for Kindergarten through Primary school. “It’s the only place he can get basic necessities.”

According to the city’s Department of Education, New York City’s public schools have admitted more than 7,200 children this year who have been placed with their parents in converted hotels or homeless shelters. Although the department said it doesn’t track students’ immigration status, most of the children are likely immigrants who arrived in New York this year, often after being bused to Manhattan by Texas officials.

The arrival of thousands of students who do not speak English, have no permanent legal status, live in temporary housing, need basic necessities, and often have made dangerous, traumatic journeys to reach the United States, have presented NYC Public Schools with significant operational challenges .

However, despite these challenges, migrant students are met with generosity and kindness from some teachers who help young newcomers and their families in ways that go well beyond their school responsibilities.

Natalia Russo, director of PS 145, said about 50 Latin American migrant children, most of them from Venezuela, had enrolled in her school since the summer. Russo said that earlier this year the school also took in a dozen Ukrainian refugee children who were offered bilingual instruction in English and Russian.

“As long as they’re here in my building, we’ll give them everything we can, even if it’s a laundry room,” said Russo, a native New Yorker whose parents were born in Ecuador. “We will do whatever it takes. Our employees will do anything.”

When Russo learned that migrants being bused to New York City were being housed in some hotels around the city, she sent school community coordinator Juan Abreu to find out if families needed help enrolling their children in school. Abreu said the need was obvious when he arrived at a hotel near Central Park.

“It was just a mess,” recalls Abreu, noting that none of the parents he met knew how to enroll their children in school. “There were a lot of questions I couldn’t answer at that point.”

Abreu also made sure that newly arrived migrant children had winter clothes, from coats and long-sleeved sweaters to gloves and hats. He set up a system for teachers who wanted to wash the clothes of migrant families and even helped some parents find temporary jobs in the city.

While Abreu noted that technically his responsibilities do not extend beyond enrolling children in school, he said he is involved in helping them in many other ways because he identifies with them. Born in the Dominican Republic, he immigrated to the USA as a four-year-old. Abreu said he lived in a homeless shelter in New York City for about three years after his mother was a victim of domestic violence.

“When I look at the kids, I remember when I was that age,” Abreu said. “And I know I haven’t had the greatest help. I felt I didn’t belong. And I don’t want the kids to feel like they don’t belong.”

Since 1982, a landmark Supreme Court ruling has allowed migrant children to attend U.S. K-12 public schools, regardless of legal status. The decision on the Plyler vs. Doehe concluded that denying migrant children access to public education was a violation of the US Constitution.

In May, Republican Texas Governor Greg Abbott, who was by bus migrants to New York and other Democrat-led cities to reject the border policies of the Biden administration, he suggested would challenge the Plyler v. Doe ruling, citing “extraordinary” expenses related to the education of migrant children. But Texas has yet to formally take up such a challenge.

The New York Department of Education said it was unable to calculate the total cost of the city’s efforts to accommodate migrant students, dubbed Project Open Arms, because it is a multi-agency initiative. But the department said it had allocated $12 million to schools accepting immigrant children.

“School counselors and social workers work closely with families, and our central team continues to work with superintendents and principals to deploy additional resources and support as needed,” the department said in a statement. “We are launching additional bilingual transition programs in schools as needed, providing teachers for the languages ​​that are most needed.”

Russo, principal of PS 145, said one of the “unintended consequences” of her school’s efforts to help migrant children was criticism that she and other teachers gave them preferential treatment or somehow encouraged others to migrate to the US and cross border. illegally to the south.

But Russo said she was focusing on addressing the immediate needs of children and families who lack any meaningful support systems in the U.S.

This week, Russo is hosting a Thanksgiving dinner at a local synagogue for families of children from her school who live in converted hotels or homeless shelters. She asked school staff and community members to help buy decorations for the party and prepare 10 turkeys. Russo added that the pro bono lawyer is also reviewing the immigration cases of some families with children registered with PS 145.

Russo expressed concern that her school would be able to continue long-term assistance to migrant families without additional support. However, she said ignoring their fight was not an option.

“I don’t have the legal or moral freedom to say, ‘You don’t belong here,'” Russo said.

Camilo Montoya-Galvez is an immigration reporter for CBS News. He lives in Washington and works in immigration policy and politics.