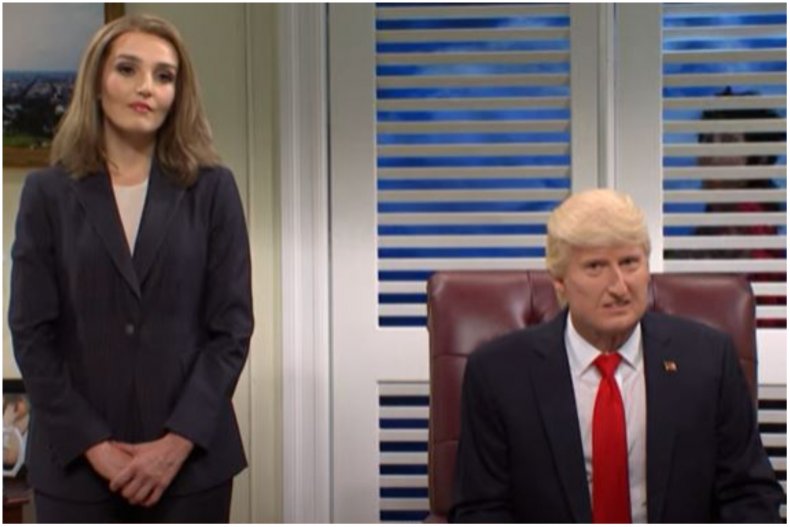 The multi-layered sketch appeared to mock the level of James Austin Johnson’s anti-Trump comedy, as well as the scripts for parts of the series.

During the cold opening, Chloe Fineman played Trump’s adviser, who told the former president to get out of Mar-a-Lago as Hurricane Ian rushed towards them.

Johnson, like Trump, wanted to reassure his adviser and said, “This is the safest place I’ve been in two years. There are no lawyers or the FBI. I am in my happy place. “

As the sketch continued, Johnson corrected his adviser when she called him Mr. President, saying, “Please call me the current president.”

The joke was a clear nod to Trump’s unsubstantiated claims that the 2020 elections had somehow been stolen from him as part of a nationwide conspiracy orchestrated by Democrats.

Throughout the scene, Teller and Dismukes commented on the sketch as if it were a sports game. They also slapped on deliberately lazy gags and performances by cast members.

At one point, Teller also att*cked one-sided gags at the expense of the Republicans and noted that no jokes had been made about Joe Biden who he said had “lost his marbles.”

Thompson explained Walker’s real blunder that China had somehow obtained “good air” in the US by causing his supposed “bad air” to move.

He said, “We all know air, don’t we?” Air Bud, Air Jorden, Erin Brokovich. See, scientists don’t understand. Everyone is talking about the climate, but what we really need to focus on is bringing Hawaii closer. Bring that vibe over her. “

Johnson appeared to agree or was stunned by what Thompson said, seeming to reflect Republican nerves about Walker being a Senate candidate.

While SNL has made a comeback in its 48th season, there have been many notable absences after several cast members left before Saturday’s episode.

Pete Davidson and Kate McKinnon were among the many performers to say goodbye to the show earlier this year.

The four new faces that have joined the cast are Molly Kearney, Marcello Hernandez, Devon Walker (not a footballer), and Michael Longfellow.

Newsweek contacted the McConnell, Walker and Trump teams for comment.