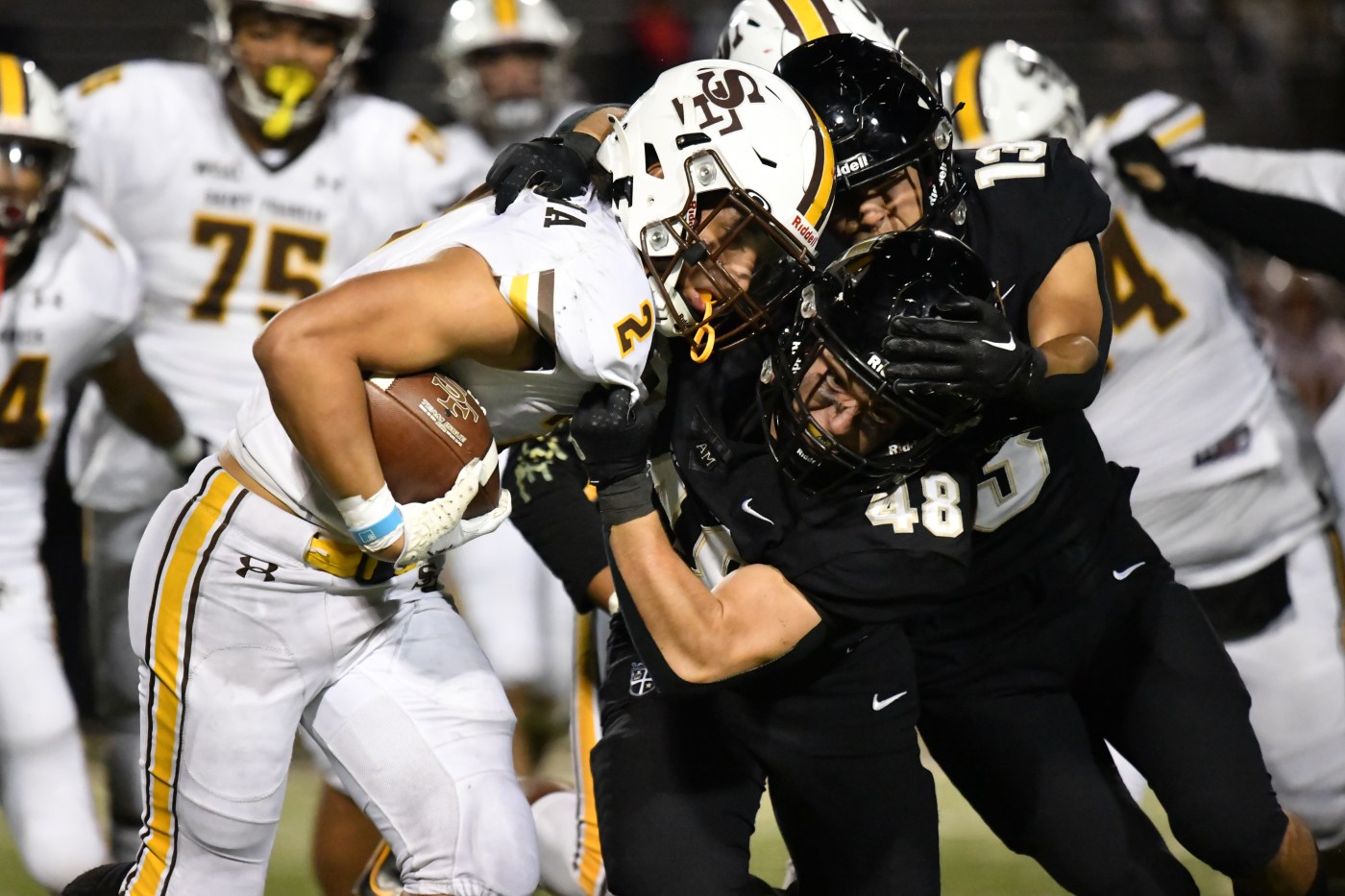 MOUNTAIN VIEW – The name of Greg Calcagno adorns the stadium in St. Francis, where he took over the West Catholic Athletic League football that his father once coached. This season, he led his side to second place in the top CCS playoff league and led them to the final blow in their first round fight for Sacred Heart Cathedral.

However, then he thought about work safety.

Keanaain’s family, he believes, provides him with much of this.

On Friday evening, Kingston’s sophomore – one of the six boys, sons of the ex-footballer Cal – carried the ball 30 times for 163 yards, including nine jumps and go-ahead in the 13th knockout, which included the last four minutes of the third quarter and the first four minutes fourth, giving the lead and ultimately a 17-14 victory.

Earlier this season it was Keala Keanaaina, the senior who carried the weight – 613 yards in the first seven games – while his younger brother struggled with knee problems. Keala is named after his father, Cal’s distinguished defender in 1999 and 2000, who for many years was able to supply a wardrobe with a typical Calcagno misdemeanor.

“Next year, my brother is coming for the first year, and next year,” said Calcagno. “So yeah, we’re excited.”

It took a wider gene pool than just Keanaain’s to survive Sacred Heart’s seventh seeded cathedral playing in his first Division I playoff game in school history, but the Lancers couldn’t have done it without them. Only five of Kingston’s 30 attempts lasted more than 10 yards – no more than 23 – during the Irish defense led by Jerry Mixon on his way back to Oregon.

In addition to being one of the few defenders to find Keanaaina on the defensive, Mixon scored a crucial intercept, starting a desperate strike towards the end zone for less than 2 minutes of play. But the drive that wins in games never materialized. St. Franciszek held the ball for 17 out of the 24 minutes of the second half.

The Lancers advance to the semi-final duel with Archbishop No. 6 Mitty, which upset the third seeded Los Gatos. Perhaps they are approaching two weeks before the championship rematch with top Serra, who defeated St. Francis on his home ground in a match for the CCS title last season.

For Sacred Heart Cathedral, the loss marks an earlier season end than last year – but possibly an even more successful campaign.

Mixon, who was instrumental in guiding the Irish to their first CIF championship last season and their first league I playoff appearance this year, pulled out of the fray and held back tears when head coach Antoine Evans turned to the team for a game for the first year.

“It’s sad to see my coaches and play with my teammates for the last time,” said Mixon. “We did a lot of things for the first time. Defeat Bellarmine at home. I played DI for the first time. … I was trying to give this whole game my best. Hopefully it wasn’t our last game, but it is. … I’m just glad to be part of this program. I look forward to the next level. “

Mixon Pac-12 teammate RL Miller, Arizona State Commissioner, after the SHC’s first serve in the second half, caught a 59-yard catch and escaped. Kendric Sanders, who led the Irish with 91 yards on 13 passes, added 19 to bring Mixon to the goal line. Miller, like Mixon, played on the defensive side of the ball in college, otherwise he was limited to two other short parties, while the only other SHC touchdown came after Sanders’s 43-yard escape in the first half.

“We had a good plan against them, especially defensive,” said Calcagno. “Not many goals, of course, but a bloody soccer game for sure.”

The Lancers made four points, one loss to the losers, and knocked out junior SHC quarterback Aidan McGrath twice, including 50 yards pick-six from senior linebacker Junior Fiaui who opened the lead 7-0 for St. Francis.

Fiaui, shoulder-length black hair streaming out of his helmet, dove in front of the receiver and continued running until he reached the end zone.

“I didn’t really know what to do,” said Fiaui. “I don’t really have a ball like that. I was a little confused and just ran away. Fifty yards later, six points on the board.

The Lancers also recovered senior playmaker Matt Dougherty Jr., who returned from a two-leg concussion absence to roll for 107 yards on a 12/17 pass, although he was also intercepted twice.

Always, however, in the Calcagno system, runners reign supreme.

Keanaain’s clan may be the answer to St. Francis after last season, when they lost the All-Bay Area defender duo Viliami Teu and Camilo Arquette, who competed together for three years and led the Lancers to the League I game title last season.

“These guys were quite special,” said Calcagno. “You don’t really replace these guys.”

But, he said, “we are quite happy with the guys, with the stable we have… not only with the players they are, but with the quality young men they are. They’re very modest, they put on a band, they work hard, so you feel pretty good when you have someone like that.

“All my brothers play soccer,” said Kingston. “At home, everything is competition. … We’ve played football together all our lives, so we just push each other to do better every day. We just motivate ourselves. “

In many ways, Keala and Kingston and their brothers are following in their father’s footsteps.

With one key exception that could come up at the dinner table as a potential rematch in a CCS championship match with the undefeated and first-place team that knocked them out last year.

“But he went to Serra,” Kingston said. “We don’t talk about it.”