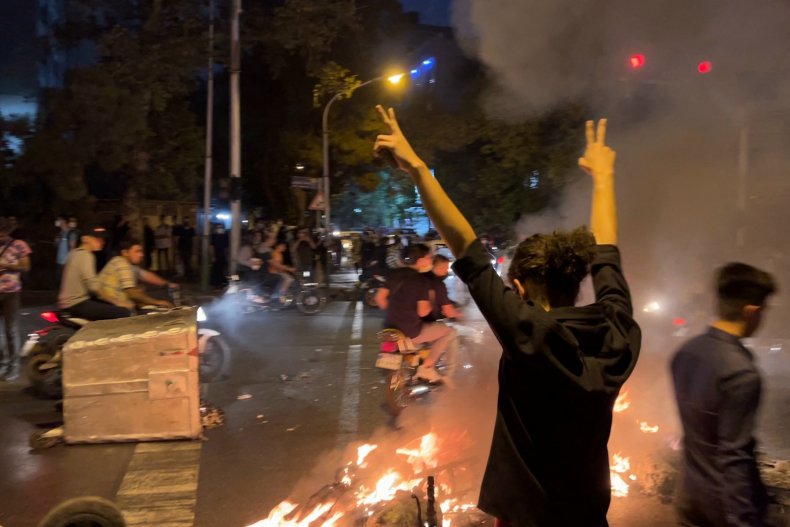 When Mahsa Amini was arrested on September 13 by the notorious Iranian moral police, the 22-year-old had no idea she would trigger protests across Iran. Her “crime” was very common: like thousands of women before her, she was arrested because she did not follow the Iranian “proper hijab” rules whereby women must cover their hair and every part of their body while expecting their face and hands below the wrist. She was taken to a van and badly beaten, including blows to the head. Three days later, she died at the Kasra Hospital in Tehran.

It was the daily circumstances of the event that made it so shocking for many Iranians. It would be difficult to find an Iranian of any background who did not have a relative arrested because of the “wrong hijab”. People from all walks of life knew that Mahsa could be their own sister, daughter or friend.

On September 17, Mahsa’s funeral in her home province of Kurdistan was accompanied by mass protests that soon spread across the country with slogans aimed not only at the hated moral police, but against the entire Islamic Republic of Iran. The favorite slogan “d*ath to the dictator” returned, aimed at Supreme Leader Ali Khamenei, and at the same time a new, positive slogan: “Women, life, freedom” was heard.

At the time of writing, four days have passed and the protests show no sign of stopping. They happened in more than 40 cities and at least 19 of the country’s 31 provinces. This makes them the biggest protests since 2009. Iran is once again in the throes of a nationwide mass movement with the clear purpose of tackling a brutal Islamic dictatorship. Already iconic images emerge from the movement that will help define its brazen courage: Woman with a scarf burning in one hand and a stone in the other, wearing a plain shirt with buttons open; another with a pink backpack and dyed green hair, casually in the face of half a dozen uniformed policemen; woman in a wheelchair taking off his hijab and burning it to the singing “we’re all in this together”. This is a revolution led by women.

For anyone who follows Iran, the fact that women are leading the movement comes as no surprise. Popular footballer Ali Karimi has spoken by many when expected that the next Kaveh (national mythical hero) in Iran will be a woman. As cliché as it may sound, many Iranians have long known that the country’s women are the key hope for change. There is not only a historical precedent behind this, but also solid structural reasons: although Iranian women are on average better educated than their male counterparts, they live under a regime of oppression unheard of anywhere in the world. They cannot travel alone or without their husband’s consent, their testimony counts as half a person in court and are denied the right to ordinary activities such as going to the stadium or smoking hookah in public. It is good then that they are at the forefront of movements for change against this regime and that hundreds of people have spent their time in prison for defying the compulsory hijab, which is the most common symbol of broader repression, but is just one of them. many forms of activism.

But the brutal m*rder of Mahsa by the state and the ensuing anger of the people were only the direct causes of the protests. The broader roots of the revolt lie in mass aversion to a regime that has failed to meet even the most basic expectations of its citizens. The economy is in turmoil and has been steadily declining for years. The system is under an overwhelming burden of corruption, mismanagement and US sanctions imposed by the regime’s nuclear program, as well as its general dislike of the West and many of its neighbors.

In recent years, any semblance of political rivalry has been stifled. Khamenei now has complete control of the country. Designated as a terror*st group in the United States and known for its malicious activities in the region, the Islamic Revolutionary Guard Corps (IRGC) now controls vast swaths of Iran’s state and economy. It successfully overtook the Iranian state. Even the mildest of critics were removed from all positions of power, and many ended up in prison. All the regime offers the Iranian people is a combination of economic poverty, social repression, and political deprivation of rights.

If the regime had survived that long, it was because of the sheer brutality it had inflicted on the people and the lack of a coherent alternative. By suppressing all elements of civic or political opposition, it has repeatedly flooded the blood of popular protests: in 2009, in 2017-18 and 2019-20. But every use of force has its limits. What is already notable about the 2022 movement is that people are struggling with more ferocity than ever before. During the 2009 movement, the rule was non-violence. This time, even Nobel Peace Prize winner Shirin Ebadi reminded people that they had a right to a legitimate defense against oppression. As anger spreads, the videos show masses of people att*cking the police to save those arrested or simply to push them away. The popular slogan threatens “I will kill those who killed my sister”, a play based on the slogan of the 1979 revolution that promised the same to “my brother”.

As a sick 83-year-old himself, Khamenei’s propensity to inflict violence is well known. In 1992, fresh from taking over as supreme leader, a revolt broke out in his hometown of Mashhad. Khamenei’s answer was unequivocal: “The counter-revolutionaries are a tiny minority and the police force must be harsh against them. Like weeds, remove them, crush them and throw them away. “

Nothing has changed since then. Fears that a popular revolt could lead to a civil war, as happened in Syria, have been around for a long time in Iran. But at some point the security forces will face the serious question: should they risk their lives trying to suppress other Iranians just to protect Khamenei’s unpopular rule? An opposition force that could appeal to the security forces and cause mass desertion could be the key to the eventual transition to democratic rule.

While Iran still lacks a united and coherent opposition force, Iranians enjoy a strong sense of national solidarity that can help make it a reality. Mahsa was an ethnic Kurd, and protests initially started in Kurdistan, where Kurdish parties have a strong tradition of social action. But they soon spread across the country, including to Tabriz, where protesters shouted in Azerbaijani, “Azerbaijan is awake; and supports Kurdistan! ” A sense of belonging to a common national home permeates Iranian society and may explain why the protests quickly spread to cities around the world, from the capital of Tehran to the Caspian cities of Rasht and Sari, to central cities such as Isfahan, and south-central cities such as as Kerman. The task of anti-regime activists at home and abroad is to turn this national outrage into a political vehicle.

Arash Azizi is an Iranian socialist activist and author “Shadow Commander: Soleimani, US and Iran Global Ambitions” (Oneworld, 2020). He is a PhD student in history at New York University (NYU).

The views in this article are the sole responsibility of the author.