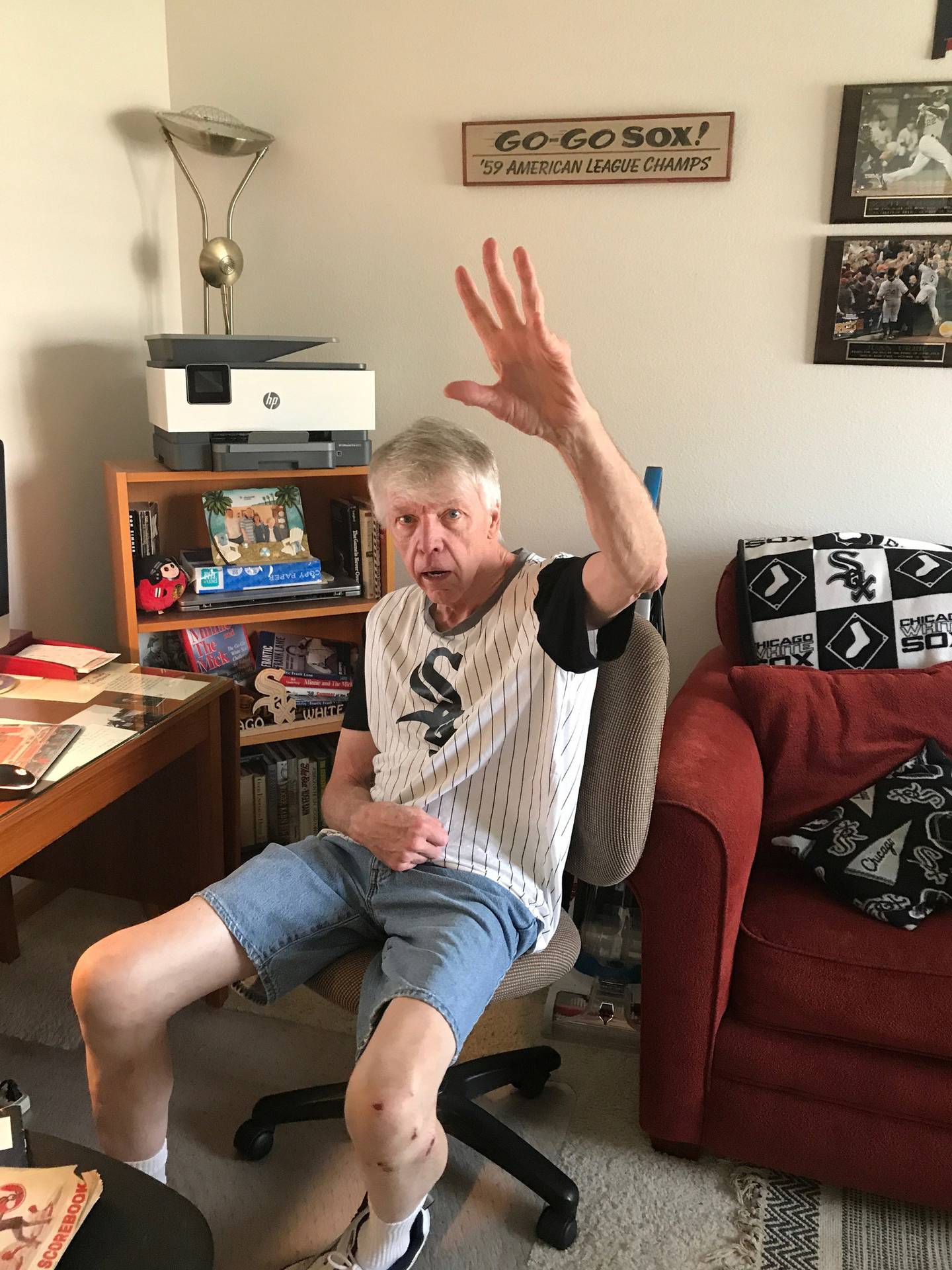 Bob Vanderberg has been known for many things for nearly 37 years with the Chicago Tribune.

A nice, generous and funny colleague who managed to light up a room despite his gentle demeanor. A talented writer and a strong, well-organized editor. An accurate impersonator of Harry Caray. Sports expert in secondary schools. And a fan and historian of the Chicago White Sox.

Vanderberg died on October 27 of Parkinson’s disease while in a Denver hospice. He was 74 years old.

“He was a great guy to work with and so much fun,” said George Knue, who joined the Suburban Trib a few weeks after Vanderberg in September 1972 and worked with him on and off for 30 years. “He loved sports. A sports writing job or a sports job, that’s what Bob was made for, and if it was for the White Sox, even better, because no one knew the White Sox better than he did. “

Vanderberg, known to friends and associates as “Vandy”, has written three books on the Sox and five in general, including “’59: Summer of the Sox: The Year the World Series Came to Chicago,” which describes the team’s US league. a season won with pennants and “100 things White Sox fans should know and do before they die.”

The team appreciated his knowledge and love for the franchise.

“Bob was a great Sox fan, whose influence he showed in his books about the history of the team and its connections with past teams and players,” White Sox said in a statement. “You’ve often seen him in the seats enjoying a Sox game with family or friends. He really was a walking encyclopedia of Sox history.

“Bob was so connected with the Sox alumni that we often heard from him about the news and fans could see his passion for the team and former players in the candid obituaries he sometimes wrote on the Tribune’s sports pages. We will definitely remember Bob and his love for the band on the opening day next year.

Born and raised in Oak Park, Vanderberg lived in a Chicago suburb for most of his life before he and his wife Pat and son Brad moved to Castle Rock, Colorado in 2019.

He attended Oak Park-River Forest High School for two years before his family moved to Glen Ellyn and graduated from Glenbard West in 1966.

Vanderberg received his BA in English from Hope College in the Netherlands, Michigan in 1970, and was subsequently drafted during the Vietnam War. Pat said he was stationed at Fort Lewis, Washington for 18 months.

After starting his professional career with the City News Bureau of Chicago, Vanderberg joined the Suburban Tribune, a suburb affiliate of the Tribune. A few years later, he moved to the Chicago Tribune and worked there until April 2009, mainly as an editor and writer in the sports department.

Vanderberg has written dozens of articles on the White Sox and obituaries of former staff, from little-known players to superstars. Among the Soxes he commemorated were managers Al Lopez and Don Gutteridge, pitching coach Ray Berres, outfits Johnny Callison, Tommie Agee and Pat Kelly, catcher Earl Battey, sniper Chico Carrasquel, and pitchers Johnny Buzzhardt and Gerry Staley, who triggered the game on Luis’s ground floor Aparicio, who finished Cleveland in 1959, sending Sox to the World Series for the first time in 40 years.

In 2004, Vanderberg selected the 25-man White Sox all-time squad for the Tribune story, and as the Sox and Cubs prepared for their first inter-league match in 1997, he wrote a brief history of the 1906 World Series between the teams.

He was also by name with many of the band members in 1959, thanks to his reports over the years. Vanderberg’s book ’59: Summer of the Sox ‘is considered to be the definitive story of this season.

Vanderberg’s specialty was finding humorous anecdotes like the one Lopez told him about Sox vice president John Rigney bringing two Catholic priests to Comiskey Park for the 1959 World Series match 1 against the Los Angeles Dodgers.

“He said,” Hey Al, we’ve got some help here, “Lopez recalled in Vanderberg’s book. “I said,” Thanks John, we need all the help we can get. ” About 20 minutes later, on the side of first base, Walter O’Malley (Dodges owner) walks in with four priests. I looked at John and said, “John, we’re outnumbered there.” “

Vanderberg dedicated a memory book of the Sox’s second base, Nellie Fox and his teammates in 59, as well as his father, whom he wrote, “he taught me to laugh at the Cubs, hate the Yankees and love God, writing and the White Sox.”

The Tribune sports desk where Vanderberg worked in the 1980s and 1990s was full of colorful characters, including many Chicago area natives who were also die-hard fans of local teams, some of whom had written beats before moving to the desk.

Vanderberg often sat on a sports hoop next to decrepit old veteran Dan Moulton, who reportedly once threw his typewriter out of the press box after the Blackhawks lost. When the result of the Sox’s heavy defeat hits the sports air on time, Vanderberg will make sure he announces it only to watch Moulton’s volcanic response.

“They were both White Sox fans, but Vandy played straight,” said NBC Sports Chicago Bulls reporter KC Johnson, the then 22-year-old working on the Tribune’s copying desk. “He always had that mischievous gleam in his eye and he deliberately irritated Dan:” What do you think about the loss of the White Sox? ” It was a great education to watch these guys on a sports hoop.

“He was basically our White Sox Google,” said Tribune sports columnist “In the Wake of the News” and baseball journalist Paul Sullivan, who reported on the Sox in the mid-1990s and from 2000 to 2002. “Every time any of us had a question about the Sox story, we just called the xerox office and Vandy knew the answer without checking it.”

Vanderberg was a particularly valuable resource for the Tribune about the Sox race to the 2005 World Series title, their first since 1917.

“I remember he was on the radio (for Sox’s tidbits) and no one could distract him,” said Pat. “We planned our vacation with the people he wanted to interview for his books.”

In his later years at the Tribune, Vanderberg was assistant sports editor at high school, helping to coordinate relationships and assign and oversee independent reporters to cover matches – as much as two dozen or more per week.

“It affected a lot of people who eventually got into journalism,” said Knue.

Vanderberg had many interests outside of sports. He spoke Spanish and was passionate about the American Flyer trains, Pat said. He loved Epcot, milkshakes, and burgers. But for most of his adult life, if he was not at home or at Sox Park, he was at the Tribune.

“Core of the guys he was with … they all worked very well together,” said Pat. “Everyone respected each other. Bob was barely screened because they knew he knew his material so well.

And that was beyond work.

Apart from his wife and son, Vanderberg left behind a brother Bruce (Gail) Vanderberg; sisters Susan (Jim) Scherbenske and Sharon (Jeff) Park; and seven nieces and nephews. His d*ath was preceded by his brother Roger in 1978.

The family hosts a memorial service and lunch at 11am on March 25 at The Lodge at Katherine Legge Memorial Park, 5901 S. County Line Road, Hinsdale.