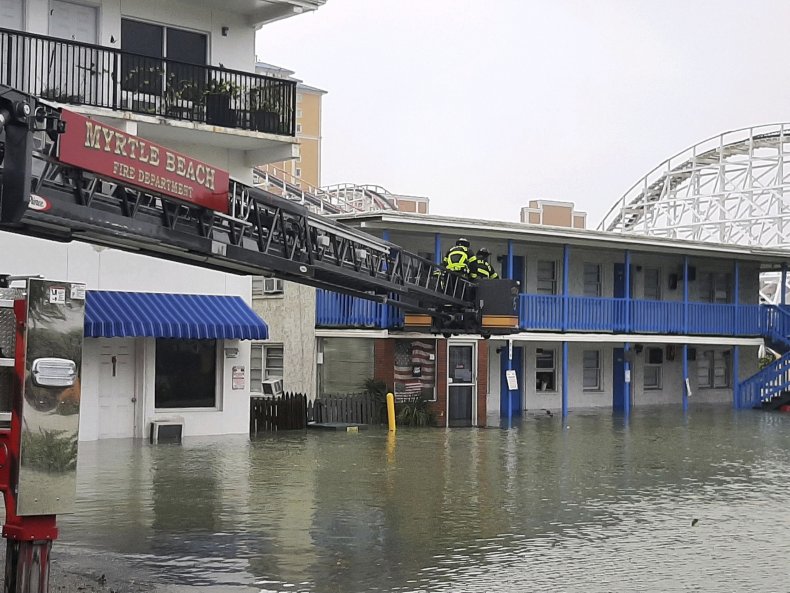 South Carolina Governor Henry McMaster said the coastal state: “Not yet from the forest” after Hurricane Ian landed on Friday, leaving the streets flooded and high winds as a post-tropical cyclone moves north through the state.

Several videos released Friday highlighted the devastation left behind by the tropical storm, including one posted by WeatherNation field reporter Josh Morgerman who shared a video of him standing in flooded waters in Georgetown, South Carolina around 3:11 PM Hurricane Ian first hit land on noon of Georgetown on Friday noon.

In the film, Morgermans moves down the street where he stands, commenting that the “historic quarter” is “completely under water”.

“The whole thing,” adds Morgerman. “As far as the eye can see.”

Some videos from Myrtle Beach, just 35 miles north of Georgetown, have also been posted showing structural damage to this popular vacation spot. One video posted by WYFF News 4 shows high tides were washing up parts of Cherry Grove Pier near North Myrtle Beach.

“Don’t drive on flooded roads,” Myrtle Beach Police wrote with the video. “There is no reason to take this risk.”

The National Hurricane Center (NHC) said Hurricane Ian struck South Carolina as a Category 1 hurricane, with wind speeds up to 85 mph. The NHC also warned in its 5pm update that even post-tropical, Ian presents a dangerous opportunity violent storms, flash floods, and high winds as it passes through the state, and can still reach wind speeds of up to 70mph.

Governor McMaster in Friday’s press release urged residents to be informed of tropical storm movement and to stay inside from the ongoing storm waves.

“Many prayers have been answered,” McMaster said in a press release. “This storm is not as terrible as it could have been, but don’t let your vigilance drop just yet.”

Unlike Florida, where Hurricane Ian landed as a Category 4 hurricane, no South Carolina residents were ordered to evacuate before the storm.

The heaviest parts of the storm seem to have passed parts of Myrtle Beach on Friday night as Ian heads inland towards North Carolina. One photo shared by photojournalist Van Applegate shows a rainbow peeking out from behind the clouds above the calm waters of South Myrtle Beach around 4:23 PM

Newsweek contacted Myrtle Beach Police for updated information on the damage and the search and rescue.