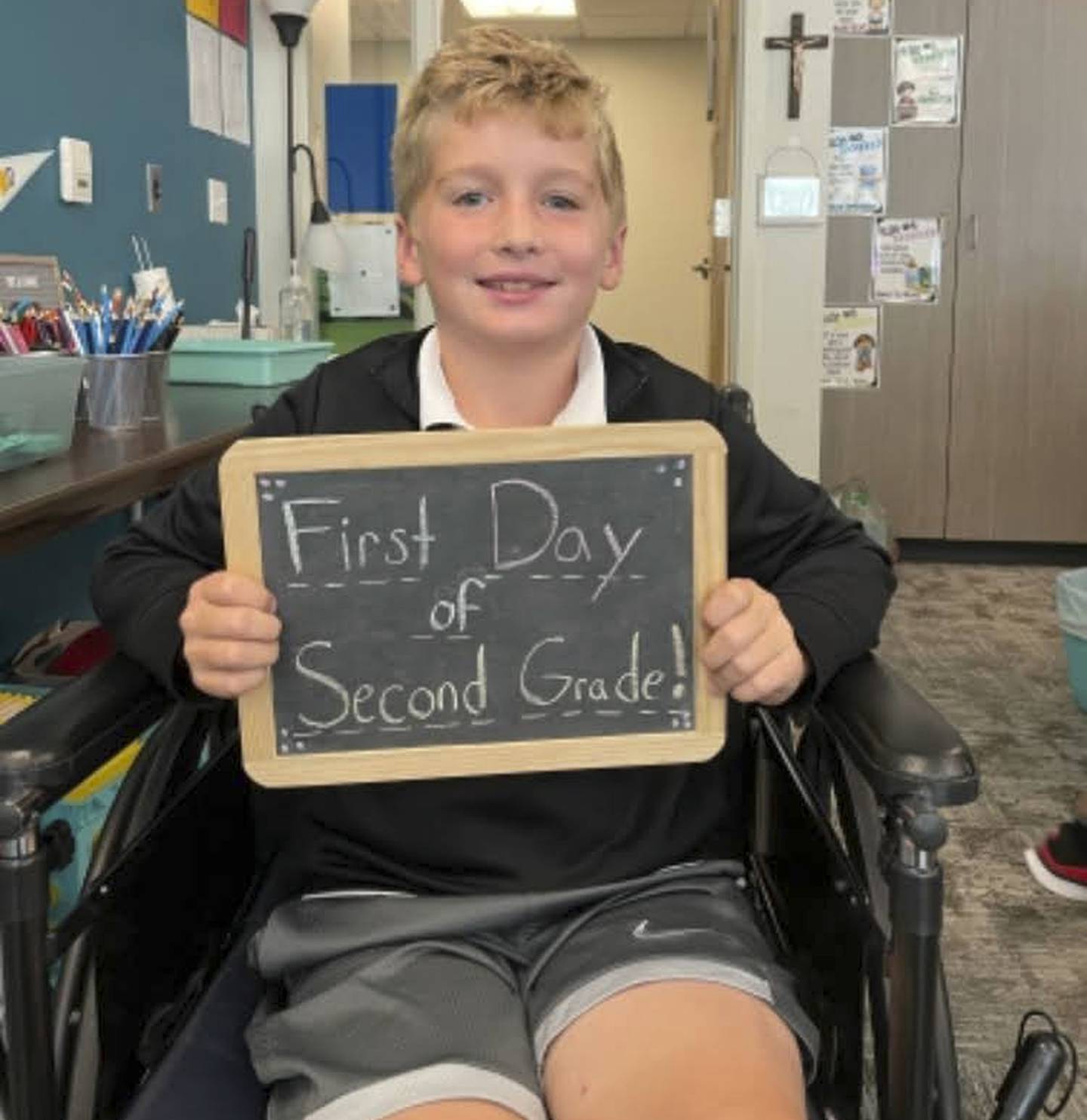 The parents of an 8-year-old Michigan boy have filed a lawsuit against Navy Pier, alleging that employees failed to follow basic safety protocols after their son fell from the top of a 24-meter climbing wall in July.

The complaint, filed Tuesday in the Cook County District Court, alleges that workers failed to properly secure the boy to the wall and there was nothing on the ground to help cushion the fall, which resulted in serious injuries to his entire body. The accident was captured on video.

Erin and Gideon Brewer of Grand Rapids, along with their Chicago attorney Steve Levin, held a press conference Wednesday to discuss the lawsuit and the accident that rocked the family.

“It’s the biggest nightmare of our entire lives,” Erin said. “This is something that me, my husband, George and his two brothers deal with on a daily basis and we don’t want this to happen to anyone else.”

Brewer said George is making progress in his recovery. After the fall, he stayed at Lurie Children’s Hospital for six days where he underwent several surgeries. He has since returned to school in Michigan, starting with half days and gradually progressing to full days.

In a statement to the Tribune, Navy Pier officials declined to comment on the lawsuit.

“We haven’t seen the lawsuit. It is our standard practice not to comment on court cases,” the statement reads.

The Brewers said they were on an annual summer trip to Chicago with their three young sons. On July 27, they said they took the kids to the Navy Pier climbing wall. The parents took the boys to the attraction the day before, and the father and children all attended, they said.

Erin said the boys “love to climb” and begged them to come back, so they took them again the next night. She said the attraction was the “highlight of the trip” so far.

When George took his turn to climb, the attendant put him in a harness but did not tie the safety rope, which his parents said they had done the day before. Levin said an assistant told George to press the buzzer, which acts as a signal to start the climb.

George began climbing the wall, and Erin began filming him, according to a press release from Brewers lawyers. Not knowing that he was not properly secured, his family cheered him on.

Upon reaching the top, George let go of the wall to slide down and fell 24 feet onto a concrete walkway, according to the release. The safety rope, if attached, would have helped him get down safely, Levin said. According to Levin, there was also no mattress or net to cushion potential falls.

Erin gasped loudly as she saw him hit the ground, cutting the video. She said the Brewer twins, 5 at the time, also witnessed their brother fall.

“They saw the whole thing, it was inexplicable,” she said.

The parents said they thought their son was dead and called for help.

According to Levin, it was clear the boy was seriously injured in the fall, but Navy Pier officials did not seek medical attention. He said bystanders called 911 and helped the family before paramedics arrived.

The 8-year-old was taken by ambulance to Lurie Children’s Hospital where he underwent treatment and three surgeries, his mother said. She said she had another surgery after returning to Grand Rapids.

Describing her injuries, which extended from her face to her ankles, Erin said George broke his tibia, femur, pelvis and chin. He also had cracked teeth and a concussion.

He was confined to a wheelchair for several months, his parents said. He is now able to walk with the help of a walker, according to a statement from lawyers. He continues to receive intensive physical therapy, he said.

George will undergo surgery in January and additional surgeries are expected, the parents said. Erin said it was heartbreaking to see her child unable to enjoy activities he was used to, such as playing soccer or running with his brothers and friends.

“It’s annoying because it was 100% preventable,” Erin said. “This should never have happened.”

Erin said returning to Chicago brought back memories of the first days and weeks of recovery, seeing him “in agony.”

“Hearing your child ask if he’s going to die – he’s just an 8-year-old boy,” she said. “It’s like his innocence has been taken away from him. It should have been a fun experience and it couldn’t have been worse.”

In testimony obtained by the law firm, Levin said the operators admitted to authorities that they had not adequately secured the boy. They also claimed not to have seen him climb or fall, saying they were “distracted” according to Levin.

“The safety of children in these types of attractions is a zero-tolerance issue,” said Levin. “There is no excuse for saying they were distracted. There was no excuse to say it was near closing time. There is no excuse for blaming an 8-year-old child or parents for something fundamental. They pledged to secure George to the wall and failed to do so.”

Levin questioned Navy Pier’s alleged lack of response to the incident, which occurred about four months ago. He said Navy Pier officials never contacted George after the incident.

“Don’t they know what happened?” Lewin said. “Didn’t they investigate it? … There are many questions that Navy Pier needs to answer on this matter. I suspect they have an answer by then.

“We don’t know what permanent damage may have occurred to his mind and body. But let me tell you, whatever the injury is, these parents’ involvement with George will keep it to a minimum.

In addition to Navy Pier, the lawsuit names Spectrum Sports and two employees who operate the climbing wall. Gideon Brewer said he hopes to hold Navy Pier accountable for what happened to their son and prevent what happened to another family.

“This is the most popular tourist destination in the country. …We entrusted them with the care of our son and they failed,” he said. “It’s just a note to other parents, no matter where you are, you can’t let your guard down.”