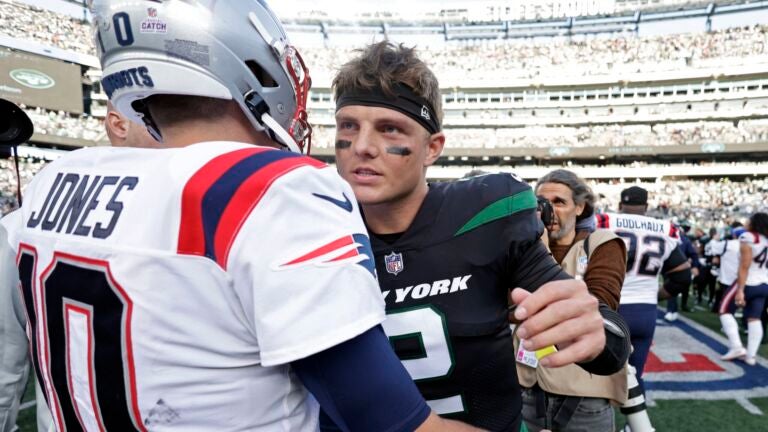 We’ve only really had one good Sunday in the NFL this season. The Patriots were just idle.

I’m not sure if that’s a coincidence.

Whether it’s a flood of star player injuries, product oversaturation, or just realizing you shouldn’t be paying to sit through that pathetic “Patriots-Colts matchup,” it’s been a pretty quiet season in the NFL. Scoring is declining (averaging 43.4 points per game over the first seven weeks of the season marks the NFL’s lowest performance since 2010), Thursday night is still Thursday night (Al Michaels, damn it), and even as some quarterbacks start to fade into the limelight ( Aaron Rodgers, Matt Ryan, Bailey Zappe) few young players in this position seem adept at fighting for the torch.

The latter two will simply face off this weekend as the Jets “invade” Foxborough to take on the last seed seventh seed New England Patriots. In fact, as things stand, both Zach Wilson and Mac Jones are leading their teams to the playoffs.

Neither of them played last Sunday, which just so happened to be the most enticing afternoon of football the NFL has produced so far this season. Vikings-Bills. Packer cowboys. Brady’s Oktoberfest in November, and yes, even the Lions-Bears were cause to tune in.

The Pats and Jets are coming to ruin everything.

Maybe that’s not the way to talk about a “playoff” pair of teams, but it was a gimmick, at least as far as New England was concerned. In fact, on the same afternoon the Patriots defeated the pitiful Colts in a game only Benjamin Moore could love, the Jets defeated the divisional top Bills, sending the AFC East into chaos. All four teams, in their current state, are heading into the postseason.

But that’s really just an indication that the East stinks less than the rest of the NFL.

Just don’t look for him in Foxborough on Sunday.

Predictions for this week:

Joe Manniello, Newsday: jets. “For the Jets everything is fine: win Sunday and they are in first place. They will lose and may fall to last place. The stakes couldn’t be higher in the franchise’s biggest game in over a decade. The Jets lost 13 in a row to the Patriots, including a brutal 22-17 Week 8 loss in which Zach Wilson threw three interceptions. People seem to forget that the Jets rebounded by beating Buffalo the following week. She dominated the defense and running game, and I expect both to be the driving force behind Sunday’s victory. The Jets have been the better team for most of the season, and if Wilson can avoid mistakes – a big “if” considering he rolled 7 INTs in three losses to the Pats – they could finally break the New England hex. Jets OC Mike LaFleur also needs to check out a more balanced game: 15 runs for 41 shots in game one is not a recipe for victory. I like that the Jets had a week off to enjoy the Bills win, regroup, and recharge for the rematch.

NJ.com employees: Three out of four like the Jets.

Tony Massarotti, 98.5 Sports Center: Patriots. “Murray likes the Pats. Felger likes the Jets. I have a potentially foolish belief that the Patriots fixed at least some of their offensive issues in their farewell week, which is a risky assumption. The last time these teams played, the Jets’ backline dominated, but Zach Wilson screwed up the game. The Pats have won their last 13 games and haven’t lost to the Jets since 2008. Under Bill Belichick, the Pats are 35-7 against the Jets in the last 42 games of the regular season and 17-2 in the last 19 games. These numbers are absolutely, definitely ridiculous.”

Gerry Dulac, Pittsburgh Post-Gazette: Jets 27, Patriots 24. “The Patriots won the first game just three weeks ago, 22-17. But instead of starting their usual slide, the Jets showed uncharacteristic resilience and rebounded the following week to defeat the Bills. Moreover, they are unbeaten away (4-0).”

Michael Hurley, CBS Boston: Jets (+3.5). “This one depends heavily on Zach Wilson being able to contain his burning desire to make 107 interceptions against the Patriots. It’s nothing for sure. But without those picks, the Patriots are not at the level of “beating the same team twice in a season” right now. No, not even the Jets.

Jimmy Kempski, Philly Voice: Patriots (-3). “In three career games against the Patri*ts, Zach Wilson has a 0-3 record, scoring 45 for 84 (53.6%) for 616 yards, 2 tank destroyers and 7 INTs for a passer rating of 50.5. I think the Jets have a better lineup overall, but I’ll believe Wilson can beat Bill Belichick when I see it.

Frank Schwab, Yahoo! Sports: Jets (+3). “The Patriots just beat the Jets 22-17 a few weeks ago. But the Jets are gaining momentum and confidence. The Patriots offensive still has many problems. I’m worried Zach Wilson will melt again on Bill Belichick’s defense, but I’ll go with the Jets and the points.

Sheil Kapadia, The Hunchback: New England (-3.5). “The smart move is probably to score points. This is a low scoring game where defense dominates. But until Wilson shows me that he can get through a game like this without making critical losses, I have to stand on the other side.

Vinnie Iyer, Sports News: Patriots 20, Jets 13. “The Jets and Patriots say goodbye. The second year of the first round QB Zach Wilson will again be based on heavy att*ck. Like the second year of QB’s first counterpart, Mac Jones. Bill Belichick’s team won the first leg in New York 22-17 by the end of October and will be well prepared for the rematch in mid-November in New England. The Jets remain too one-dimensional and not numerous enough to win here, while the Patriots will introduce new offensive wrinkles.

Bill Bender, sports news: Patriots 24, Jets 21. “These teams met in Week 8, and the Patriots won 22-17 on five field goals from Nick Folk. The Jets had a week of goodbyes to enjoy their win over Buffalo. Zach Wilson had a season-lowest completion percentage of 48.8% in Game 1 against the Patriots. What will Wilson learn from this experience en route against Bill Belichick’s defense?

Michael David Smith, Pro Football Talk: Patriots 20, Jets 14. “All four AFC East teams are in the playoffs, which makes it an important game. Look for the Patriots defense to play well against Zach Wilson when New England wins.

Gregg Rosenthal, NFL.com: Jets 19, Patriots 16. “The Patriots’ sweep of the Jets this season, in all seasons, seems too cruel for even Bill Belichick to achieve. The spread of points in this game is surprising because the defense of the Jets is by far the best unit in this game. The difference between Mac Jones and Zach Wilson is either negligible or non-existent, unless the farewell week somehow resolved Jones’ deep crisis. Until I see that, it’s hard to trust the Patriots team, even in a matchup that heavily favored Belichick in the past.

It says Patriots 16, Jets 10. The battle for the last spot in the division can also help determine possible playoff seedings. Conjecture.

Get the latest news and analysis delivered to your inbox during football season.