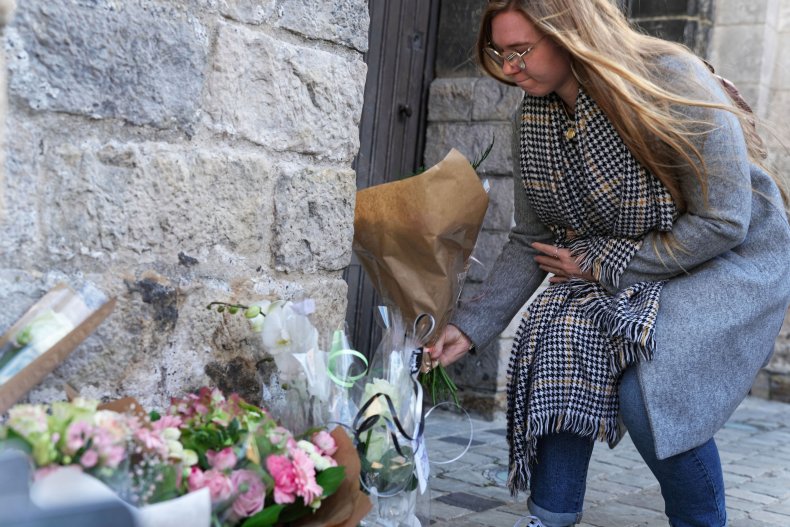 Last month, Lola, a 12-year-old girl, was found in Paris partially decapitated and placed in a suitcase. This child was abducted, raped, mutilated and m*rdered by Dahbia B., an Algerian immigrant. The details of her d*ath are terrifying. She was found by a homeless man, placed in the courtyard of the building where she lived. Her face was taped and her feet and hands were tied. The numbers were written on sticky notes stuck to her feet. The suspect’s testimony to the police reportedly contained even more disturbing details.

This m*rder, yet another terrible crime committed by a foreigner against a French citizen, had a particular resonance in a sea of ​​m*rder, rape and other crimes committed all too often in France. This shocked the population greatly, as evidenced by the many anonymous passersby who laid flowers in front of the building where the victim lived, coupled with the numerous rallies and moments of silence observed throughout France. At the funeral on October 24, attended by the Minister of the Interior, the church was too small to accommodate the entire audience.

Lola’s m*rder reverberates not only because of the gruesome details, but also because of her family’s location and origins. It took place in the north of Paris, a part of the capital known for the mass presence of immigrants. Lola’s parents are building caretakers, a worker profession. These are people who get up early, work hard, and are discreet. They are so discreet that their daughters have hardly spoken to the media since the m*rder.

The crime also echoed due to the origin of the m*rderer. Dahbia B. was an illegal immigrant. She came to France legally in 2016 with a student residence permit, but has exceeded the visa validity period. The French government asked her to leave the country. But as this is almost always the case, her deportation order was not complied with. Even as others complained about her aggressive behavior, the law was still not enforced in 2019. The fact is, if Dahbia B. were deported, Lola would still be alive. The state that was supposed to ensure the security of the French has failed.

The joint responsibility of the authorities is obvious. But the talking classes are on a crusade to condemn “indecency of the extreme right“To focus the conversation on stigma foreigners and people with mental disordersand to express concerns about the possibility of “political exploitation” of the event by the same “far right”.

The media decide to either relativize this event – making this horrible m*rder of a little girl, among others simple message – or to intimidate those who are indignant with it, by ridiculing those who mourn Lola and do not want such a m*rder to repeat itself as “neo-Nazis”They argue that when a white woman is m*rdered by a non-white offender, only silence is worthy of dignity. The state immigrant could not bring himself to deportation killing a native French.

So we rarely react to a tragedy by refusing to die of any symbolic importance. Americans put up with the symbolic use of d*ath in any mass shootout. The French have a symbolic narrative every time a hunting accident occurs – though these are rare and dramatic events, they lead to a series of stories about the importance of banning hunting. And there is the symbolism of BLM, where every act of police violence against black people becomes an event of global importance. But when it comes to m*rders that touch upon the awkward truths of mass immigration, such generalizations are categorically denied.

After all, more time on television will be devoted to denouncing “political exploitation” than talking about what actually happened and what can be done to avoid these avoidable crimes. Éric Zemmour stated a concise problem: “Beating, rape, m*rder, stabbing a French or a French woman by an immigrant are not news.”

It doesn’t take a genius to see that Lola’s story is being suppressed because she is too perfect a symbol of France’s misfortunes. The left doesn’t care when tragedies happen outside of their favorite groups. Some screams are more legitimate than others. The tears of the Lola family are no less than those of George Floyd, but we are told there is no place for the former in the public square. This aggravates the working class’s frustration with the system. The working class is to go home and remain silent about mass immigration which has not been consulted and which has they reject massively.

The collective shock of the French working class is met with the utter indifference of their elite. They are completely powerless, they are expected to play Russian roulette in French. Instead of putting a revolver to their head, they go to work and school. Every day they have to ask themselves:my son is waiting for the train, are the Moroccans going to hit him and rob him on the platform? Or maybe an Algerian will att*ck him with a knife on the train? Will my wife be raped in the street by an Algerian who has not been in the country legally but has not been deported?or will another just drive me and my grandson with his car? Lola is about to be one more victim. There will be more after it.

Three days after the discovery of Lola’s m*rder, the president of the republic tweeted condolences – not to her, but to members of the National Liberation Front of Algeria who died during a demonstration in Paris 61 years ago. The d*ath of the Algerians killed by the French decades ago affects the head of state more than the d*ath of a little French girl by an Algerian woman on the same day.

This invocation of the Algerian war raises a terrible irony. In the last days of French Algeria, Algerians warned French settlers that they could choose “a suitcase or a coffin” – leave Algeria or be killed. In the case of Lola, the French found that now the two possibilities have become the same.

Pierre-Hugues Barré is a Senior Lecturer in Constitutional Law at Sciences Po Paris and an academic guest at the Oxford University Faculty of Law.